Cree slips back on revenue miss

LED maker's stock price plunges 15% as it warns sales and earnings will be lower than expected. 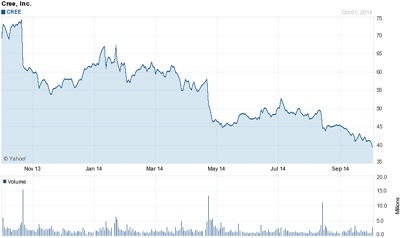 LED lighting company Cree has seen another 15 per cent wiped off its stock price after alerting the US stock market that sales and earnings for the latest financial quarter will be well below prior guidance.

Back in August the Durham, North Carolina, firm had said that it would post sales of between $440 million and $465 million - and that its margins would be squeezed as a larger proportion of those sales would come from LED light bulbs, which are less profitable than other products.

Now Cree says that sales will come in at around $428 million for the three months ending September 28, down slightly on the figure of $436 million reported for the prior quarter.

The main reason for that, says Cree, is falling sales of its LED components. Whereas sales of light bulbs and other lighting products have surged since last year, what Cree refers to as LED product revenue (typically from sales of chips, components and modules) have dropped 20 per cent over the same period.

“[LED product] revenue is expected to be lower sequentially for both direct and distribution customers,” the company said, attributing the decline to weaker global demand than it had been expecting.

Because an even greater proportion of Cree’s sales in the quarter will now be made up of lower-margin lighting products, the company’s profits will take an additional hit.

Cree’s stock price had already slipped back by around 10 per cent on apparent fears of the lower margins, and following the latest slump the stock has now halved in value over the past year (see graph above) - despite sales growing rapidly overall.

Trading at around $34 on the Nasdaq exchange shortly after its October 2 sales and profit warning, the company had a market capitalization of approximately $4 billion.