Demonstration of 12 kW fiber cutter based on IPG laser expected at next month’s Fabtech trade show. 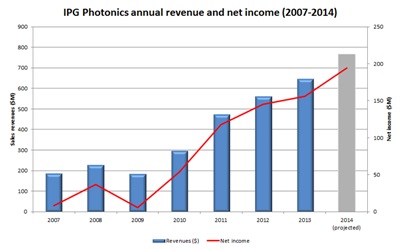 Fiber laser firm IPG Photonics has reported a 16 per cent year-on-year increase in revenue for the third quarter of 2014, thanks to across-the-board demand for its various lasers.

Pushing sales to another quarterly record of $199.7 million, IPG’s top-line growth was outpaced by its increase in profits as, aided by some beneficial currency rate fluctuations, net income jumped 30 per cent on last year to $55.1 million.

“These results demonstrate our fiber lasers' continued penetration of large-scale applications, our ability to capitalize on growing demand for several key applications, as well as the leverage we have in our operating model,” said founder and CEO Valentin Gapontsev, who has also decided to invest in a corporate jet (see below).

Gapontsev highlighted the continued trend towards using higher-power sources for cutting applications, as customers demand the ability to cut thicker pieces of metal and at higher speeds.

“We are seeing a clear trend to use higher power lasers for cutting applications,” the CEO told an investor conference call.

“Last week at [sheet metal trade exhibition] EuroBLECH, some OEM customers demonstrated cutting systems using IPG's 8 kilowatt fiber lasers. One of our customers has promised a demonstration of a 12 kilowatt fiber cutter at the Fabtech show in November.”

Cutting market growth
Gapontsev cites market research suggesting that there is plenty of headroom for IPG to expand into. “From worldwide sales of over 7,500 units of high-power laser cutting machines expected in 2014, the share of fiber cutters doesn’t exceed 30 per cent,” he explained.

By 2020, that share is expected to have grown to between 60 and 80 per cent of an anticipated 12,000 units. If correct, it would represent a near-quadrupling of fiber laser unit shipments by the end of the decade – with the added benefit of the demand for higher powers.

“Taking in account these two trends, we can expect the growth of fiber cutting sales by a factor of five to eight times during the next six years.”

Sales up in Europe
While high-power lasers remain IPG’s primary cash-cow and accounted for more than half of overall sales in the latest quarter, sales of what IPG describes as “medium-power” lasers grew at an impressive rate – up 45 per cent on Q3 of 2013 to $20.6 million.

CFO Tim Mammen said of that trend: “Much of the growth is coming from sales for fine-processing applications, particularly cutting of thinner materials and also from laser sintering applications.”

Sales of IPG’s quasi-CW (QCW) lasers are also growing rapidly, thanks to demand for fine-welding applications in consumer electronics and drilling of turbine blades. They more than doubled on last year’s figure to reach $14.5 million.

Perhaps surprisingly, given recent macroeconomic commentary, IPG reported robust sales growth in Europe, where revenues were up 23 per cent on last year thanks in part to demand from a major German car maker. Sales to China grew even more strongly, although business in the US and Japan has weakened, Mammen added.

In the important automotive manufacturing market, Gapontsev said that applications in car roofs and air bags had recently passed a production test by one of the major European manufacturers.

“An Asian car maker [also] qualified our new customized “ECO” laser for mass implementation in their body-in-white assembly lines,” Gapontsev added, while IPG’s “seam-stepper” systems are still being tested by customers. “We expect meaningful growth from these systems over the long term,” Mammen told investors.

50kW NASA order; Private jet
Sales in the North America region will soon be boosted by news that the NASA Ames Research Center has just placed an order for at least two 50 kilowatt lasers, and potentially another two, in a single contract valued at $3.4 million. They are set to be used to test heat-shield materials for NASA's Orion Multi-Purpose Crew Vehicle (MPCV) currently under development.

With that, various new OEM partnerships and the qualification of fresh applications, the IPG team is confident of another solid quarter to round off the year and is predicting sales somewhere between $190 million and $205 million in the fourth quarter.

If it can achieve the top end of that guidance, the company will post annual revenues of around $767 million - a figure that would represent an 18 per cent hike on the fiscal 2013 return of $648 million.

Perhaps buoyed by a healthy listing at number five in Forbes' latest list of America's best small companies, and with a balance sheet now showing nearly half a billion dollars in cash and equivalents burning a hole in its pocket, IPG’s management has even decided to buy a private jet. The $22 million aircraft purchase has been financed with long-term debt, Mammen said.