Technology transfer deal with ALPhANOV center will allow MuQuans to make 780nm sources for its own atom-cooling instruments. 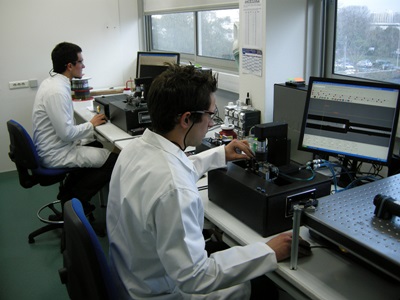 MuQuans, a start-up company that span off from the Institut d’Optique and Observatoire de Paris in France in 2011, is set to begin making fiber lasers emitting in the near-infrared for internal use.

It follows a technology transfer deal with the ALPhANOV technology center, part of the Route des Lasers cluster in the Aquitaine region of France around Bordeaux.

ALPhANOV researchers have developed the 780 nm sources,and MuQuans wants to use them in its high-precision instruments that are based on cold atom technology.

Under the terms of the agreement, Talence-based MuQuans will be able to accelerate the launch of its own products featuring the lasers.

Cooler than cool
The instruments are designed for use in quantum physics applications such as measuring gravity with extreme precision, or providing time references with state-of-the-art stability and accuracy.

The lasers are critical because they are used to cool a cloud of atoms trapped in a vacuum chamber close to absolute zero.

MuQuans recons that the lasers will allow it to offer a tool capable of measuring gravity with a relative accuracy of 10-9, which could be used in various geophysics applications, as well as an atomic clock with relative stability and accuracy close to 10-15 for time metrology applications.

ALPhANOV director Benoit Appert-Collin said of the deal: “This technology transfer is the result of strong collaboration and coaching since MuQuans’ creation in 2011. It fully reflects ALPhANOV’s mission to support entrepreneurship in the field of photonics.”

Bruno Desruelle, the president of MuQuans, added: “It’s clear that our progress would have been slower without this collaboration. This transfer will allow us to internalize an expertise that is critical for our business.”

It is not the only area where the two are collaborating. Another example is the “Graviter” project, which is funded by the French Ministry of Defense (DGA) and aiming to develop a field quantum gravimeter to detect gravitational waves.

One of the largest photonics clusters in Europe, Route des Lasers comprises some 70 companies involved in the manufacture or application of photonic products. Among them are another fiber laser company in the form of Amplitude Systèmes, and optoelectronics-focused subsidiaries of the defense giants Sagem and Thales.