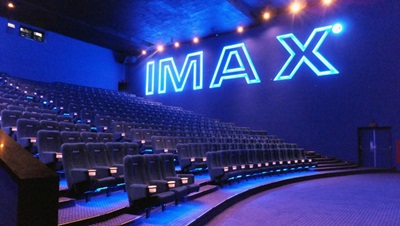 Rolling out: laser projectors at IMAX

Movie fans are about to get a taste of the next generation of projection technology, with news that the first IMAX laser projector system will be installed in December.

The company’s CEO Rich Gelfond told an investor conference call that he had watched some footage of director Christopher Nolan’s eagerly awaited space drama Interstellar on the system last month.

“Not only were the technical aspects of color, contrast and brightness, all amazing, it was a visual reaction that really blew me away,” he said.

Pointing out that the technical specifications set for the new format had been beaten, Gelfond added: “When that [movie] image was on screen, it was literally one of the best IMAX images I’ve ever seen and certainly one of the best images I had ever seen.”

From a business perspective, the new laser projector will also give IMAX the opportunity to sell new theaters to customers wanting larger screens and higher seat counts than possible with existing digital projectors – largely because of the much higher brightness of the laser sources.

Earlier this year California-based Necsel said that it had signed an exclusive deal to provide the visible-range lasers for IMAX’ new projectors, which utilize intellectual property initially developed by Eastman Kodak and rely on systems expertise from Belgium’s Barco. IMAX and Barco signed a seven-year collaborative deal in February 2012.

2015 roll-out: 10-15 laser upgrades
IMAX’ financial chief Joe Sparacio explained the planned roll-out of the technology to investors, saying: “We expect to install 10 to 15 laser upgrades in 2015.”

He added that the specifics of the roll-out were still to be “nailed down”, and pointed out that the revenue and costs associated with each upgrade varied with the size of the screen – bigger screens require more lasers to achieve the desired performance.

The initial roll-out of the laser projectors next year is not expected to generate any significant profits for IMAX, with market penetration and awareness of the improved visuals - which should be especially apparent for 3D movies - being the company’s priority in the near term.

That is partly because some theatre clients will have only recently upgraded to the current generation of non-laser digital projection, and would be unlikely to pay for another upgrade so soon.

But Gelfond cited examples such as the Lincoln Square complex in Manhattan, Universal CityWalk in Los Angeles and the Metreon Center in San Francisco as some of the theaters that will get an upgrade.

The CEO does not expect the cost of IMAX tickets to rise as a result of the new technology, arguing that theaters will be able to use the laser projectors in larger auditoriums so that more people can watch.

In its results, IMAX posted a pre-tax profit of $6.8 million for the quarter ending September 30 on total sales of $60.7 million. Around $12 million of that revenue was attributed to equipment sales.

Of the total 439 theaters that are on the IMAX backlog, the company has 69 earmarked for laser projector installations while in total it has a global network of 880 theaters.