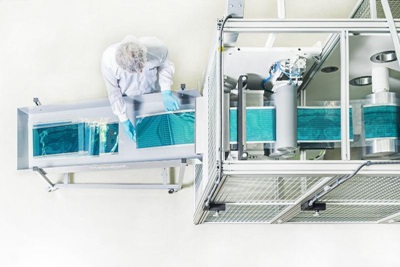 Dresden, Germany, based Heliatek, arguably the world’s leading exponent of organic photovoltaics (OPV), has raised €18 million in a completed “C” round of equity financing that will aid the commercialization of its transparent OPV films.

In a market that has spooked venture capitalists in recent years, the funding round was led by AQTON SE - an investment vehicle belonging to Stefan Quandt, a German entrepreneur who is currently ranked by Forbes magazine as the world’s 71st richest person.

The round of investment will allow Heliatek to take further steps to commercialize its OPV films, which are manufactured using a roll-to-roll process based on low-temperature vacuum deposition.

Heliatek CEO Thibaud Le Séguillon said in a company statement: "This fresh money will help us to reach our set of operational and sales goals until 2016, including the introduction of transparent HeliaFilm in production by the middle of next year.” He told optics.org that the aim is to be producing films with 30 per cent transparency and 5 per cent conversion efficiency in mid-2015.

BMW fortune
For Quandt, who inherited much of his estimated $14.3 billion fortune through a 50 per cent share in the auto giant BMW owned by his late father Herbert (along with mother Johanna and sister Susanne, the family still owns nearly half of the company), the deal represents a second intervention in the photovoltaics business.

According to Forbes, he acquired a 94 per cent in the bankrupt solar module maker Solarwatt back in 2012 – the company subsequently agreeing a partnership with BMW.

Paul-Josef Patt, CEO of eCAPITAL AG - which also took part in the round - said in Heliatek’s statement: “In the last 12 months, Heliatek has made enormous progress as the technology leader in organic solar films, and we are now looking forward to taking the next steps towards commercialization together with AQTON SE.”

Examples of that progress include pushing the conversion efficiency of its opaque OPV films to a world-record 12 per cent in the laboratory. Currently, the efficiency of Heliatek’s commercial products remains significantly lower, at 6 per cent, although Le Séguillon says that the company is hopeful of reaching 8 per cent by early next year.

“D” round needed
OPV films are now being supplied to industrial partners in anticipation of applications in building-integrated photovoltaics (BIPV) – where the fabric of a building, like roofs, windows and walls, are used to generate electricity. Heliatek says that it has also supplied automotive companies – a market where Quandt’s influence will no doubt prove advantageous.

Taking part alongside AQTON and eCAPITAL in the latest round were German chemicals giant BASF – which supplies key starting materials for OPV – as well as the industrial giant Bosch, Innogy Venture Capital (part of energy company RWE), venture firm Wellington Partners and more. All have previously invested in Heliatek.

The round brings total investment in Heliatek to date to €46 million. Back in 2011, Le Séguillon told optics.org that the company was looking to raise up to €60 million, in order to finance an expansion to a production capacity of 50 MW.

But with the PV industry having since endured a period of turmoil and a major shake-out of manufacturers, many venture investors have abandoned the sector.

Now armed with the finance required to get its transparent films into volume production, Heliatek’s annual film capacity stands at 50,000 m2 currently. Le Séguillon says that a final, “D” round, of financing would be needed to expand that capacity by a factor of 20, to the company’s goal of 1 million m2.

• Heliatek CEO Thibaud Le Séguillon will be among the speakers at next week's Invest in Photonics event in Bordeaux, France, where he will take part in a session on "photonics opportunities in environment and energy efficiency".