Acquisitions in Turkey and India as EBIT jumps 61% and laser sales climb by 11% at the machine tool giant. 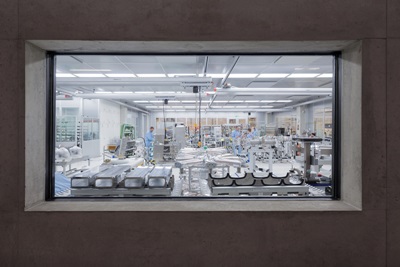 Trumpf, the machine tool vendor and world’s largest maker of industrial lasers, has confirmed a huge increase in pre-tax profits for its latest financial year, and says that it is about to set up a subsidiary dedicated to extreme ultraviolet (EUV) lithography applications.

The privately owned firm, which is headquartered in Ditzingen, Germany, said earnings before interest and taxes (EBIT) rose by 61 per cent to €248 million in the year ending June 30.

Partly a result of the 10 per cent increase in sales (to a record €2.59 billion) that the company had earlier reported, Trumpf’s president Nicola Leibinger-Kammüller added that efficiency improvements had also had a major impact on the bottom line.

“Even more important for our higher earnings are several broadly-based yield and productivity enhancement programs, thanks to which we were much more efficient over the past year and a half,” she said.

And while the latest results included a boost to sales from the acquisition of a majority stake in the Chinese machine tool manufacturer Jiangsu Jinfangyuan CNC Machine Company Ltd. (JFY) a year ago, the underlying demand for Trumpf equipment appears very healthy.

“Over the past fiscal year we have strengthened our company at strategically important points by means of acquisitions," said Leibinger-Kammüller. “However, even if one deducts these special effects, sales have still exceeded the two and a half-billion-euro mark for the first time.”

Laser sales up 11%
Choosing to base its annual report around the theme of the forthcoming International Year of Light (IYL2015) and the myriad applications that its range of lasers have helped to enable, Trumpf goes on to state that in the latest financial year its “laser technology” division registered sales of €762 million – up 11 per cent on fiscal 2012/2013.

More than 10 per cent of that total was attributed to the ramp in demand for high-power carbon dioxide lasers required for the emerging extreme ultraviolet (EUV) lithography market – and almost exclusively driven by ASML’s latest generation of scanners.

“Sharp growth was also registered in the lasers for micro-applications sector, with a major focus on the production of mobile displays,” added the firm, whose sales of TruDisk lasers are said to have near-doubled in the period.

While the company’s total sales remain dominated by machine tools, Trumpf points out that almost exactly two-thirds of its revenues relate to what it calls “laser-relevant products”, in other words where the laser is the fundamental element.

At €1.73 billion, sales of “laser-relevant products” were up from €1.59 billion – although because of the acquisition of JFY, which has historically sold only a small number of laser-based tools, the proportion of sales featuring lasers actually declined slightly.

That looks set to change, however, as Trumpf is supplying JFY with lasers that are now being integrated into the latest laser cutting centers in China.

New EUV subsidiary
On the topic of EUV, the requirements of the service model for lithography scanners provided to chip manufacturers around the world by ASML has led to Trumpf’s various subsidiaries around the world working together to offer round-the-clock service.

“This is the first time that Trumpf subsidiaries from several continents have worked together closely in this way,” noted the firm in its annual report, adding that it would shortly be setting up a subsidiary company dedicated to EUV activities and capable of responding to quickly to changes in demand for the new lithography tools in the coming years.

Among the other hot topics for industrial lasers is additive manufacturing, and having established a new department focused on this area in early 2014, Trumpf has identified some key opportunities in the automotive and aerospace sectors:

“In the automotive industry, the method is suitable for manufacturing all kinds of components in short runs. In the aerospace industry, turbine manufacture harbors great potential,” said the firm.

Meanwhile, Trumpf is continuing its global expansion with two more acquisitions. The company has acquired a majority stake of 51 per cent in the Indian software manufacturer India Metamation Software Pvt. Ltd. (including an interest in its American subsidiary Metamation Inc.), described as one of the world's leading software providers for machine tools.

On top of that is a stake of 80 per cent in the Turkish company KOZ Makina Sanayi ve Dış Ticaret A.Ş., its longstanding trading partner in the fast-growing economy.

For the current year, Trumpf’s financials are set to improve once again. Although the firm sold its medical technology division in August, with orders rising by 16 per cent to €2.7 billion euros in the year to June 30, another strong year looks likely at this stage.

Following the busy period of acquisitions and internal expansion, Trumpf’s employee count has also jumped sharply. Over the past 12 months, it is up 10 per cent to nearly 11,000.