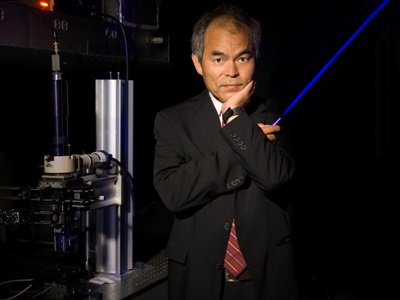 Three of the key researchers behind the development of blue LEDs – and therefore the white-light emitters currently revolutionizing the lighting industry – have won the 2014 Nobel prize for physics.

Shuji Nakamura, who found a way to make gallium nitride semiconductors emit light efficiently while working for the Japanese chemicals firm Nichia back in 1992, shares the award and SEK 8 million ($1.1 million) cash prize with Isamu Akasaki and Hiroshi Amano.

Amano, once a student of Akasaki’s at Nagoya University in Japan, is now a professor at the same institution.

Nakamura moved to the University of California, Santa Barbara, following his acrimonious departure from Nichia (Nichia infamously paid him a bonus of just $200 for a breakthrough that generated millions in sales) and has since co-founded the LED lighting firm Soraa.

Woken by a phone call from the Nobel committee at his Santa Barbara home, Nakamura said he was “so surprised” to win the prize, adding that the ubiquity of white LEDs in high-efficiency, energy-saving lighting products today made him “very happy”.

“This year’s [physics] laureates are rewarded for having invented a new energy-efficient and environment-friendly light source,” announced the Nobel committee. “In the spirit of Alfred Nobel the prize rewards an invention of greatest benefit to mankind; using blue LEDs, white light can be created in a new way. With the advent of LED lamps we now have more long-lasting and more efficient alternatives to older light sources.”

Material problem
Where Nakamura, Akasaki and Amano succeeded – and where countless other researchers and corporate research departments had failed – was to find a way to generate blue light efficiently from a semiconductor device.

At the other end of the visible spectrum, there was no such problem. Following the invention of the LED in 1962, it had proved relatively easy to produce efficient red, orange and yellow emitters – all based on gallium arsenide (GaAs) semiconductors and a variety of related compounds.

But the electronic bandgap of GaAs and its variants was not wide enough for the material to produce photons in the blue spectrum. For that, the ideal material was another compound semiconductor. Gallium nitride (GaN), with its much wider bandgap, could emit not just in the blue but also a long way into the ultraviolet range.

So why not just make an LED out of GaN? The crux of the problem is that the light-emitting element of an LED is contained within its ultrathin semiconductor layers, which are carefully deposited on top of a host material, or substrate.

Crucially, that substrate has to be a good match for the light-emitting active layers. Any differences in terms of crystal lattices or thermal characteristics (semiconductor layer deposition takes place at extremely high temperatures) drastically impacts the LED’s performance.

To make red, orange and yellow LEDs, the key layers could be grown on large GaAs crystal substrates, which were relatively easy to make and readily available. The big problem for GaN was that no equivalent substrates were available, because it is physically much more difficult to make large GaN crystals.

In the absence of GaN substrates, researchers had turned to materials with similar crystal lattice structures, like sapphire and silicon carbide. In 1989, Amano and Akasaki actually reported the first GaN-based LED at a conference in Los Angeles, and an improved version at the Materials Research Society (MRS) meeting in Boston two years later.

But those first devices were relatively dim and inefficient. The right combination of materials, dopants and growth recipes to produce a truly bright emission proved elusive until, in 1993, Nakamura found a solution.

Key to the solution was a discovery that p-type GaN films could be grown by doping GaN with magnesium, followed by successive post-thermal annealing under nitrogen.

Once he had cracked the fundamental problem, he spent the remainder of the 1990s publishing details of blue LEDs with increasingly high brightness and efficiency and then a blue semiconductor laser, while employer Nichia commercialized the devices. 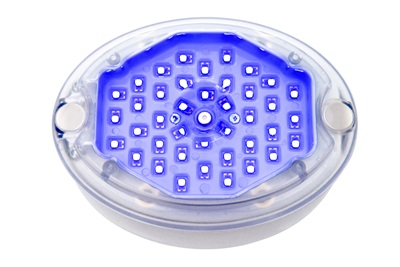 Blue LEDs: not just for lighting

Blue plus yellow equals white
With a viable blue LED, it was now possible to produce white light – in two fundamentally different ways.

In the two decades since Nakamura’s GaN device breakthrough, blue LEDs and phosphors have been refined to such an extent that their electrical efficiency is far superior to either incandescent or fluorescent lamps.

And while achieving the same kind of “warm” light that a traditional bulb produces had proved difficult, a revolution in the lighting industry based around GaN semiconductor emitters is now in full flow.

Perhaps the best evidence of that revolution came just last month, when the world’s number-one lighting company, Philips, said that it would split into two separate organizations – something that is a direct result of the blue LED invention and its disruptive effect.

Following the courtroom drama of his exit from Nichia, not to mention the myriad patent battles between Nichia, Toyoda Gosei, Cree and others that characterized the following decade, Nakamura has since moved to UCSB and concentrated on finding an even better solution to the GaN material problem.

The UCSB start-up Soraa that he co-founded is based on the principle that GaN crystals stll provide by far the best material host for GaN-based LEDs. It is now in the process of building a factory in update New York to ramp that concept to volume production - and what could become a revolution with a revolution.

Reaction
Responding to the award, The Optical Society's chief executive Liz Rogan said: "How very fitting that on the cusp of the 2015 International Year of Light, the Nobel Prize in Physics is awarded for this critical light-based technology."

Among the others offering their congratulations were the European Commissioner for Energy, Günther Öttinger, who tweeted: "Congratulations to Akasaki, Amano and Nakamura! #Nobelprize for Physics for invention of LED lamps. Shows importance [of] #energy efficiency."

Frances Saunders, president of the UK-headquartered Institute of Physics, added: "With 20 per cent of the world’s electricity used for lighting, it’s been calculated that optimal use of LED lighting could reduce this to four per cent. Akasaki, Amano and Nakamura’s research has made this possible and this prize recognizes this contribution.

"This is physics research that is having a direct impact on the grandest of scales, helping protect our environment, as well as turning up in our everyday electronic gadgets."

H. Frederick Dylla, CEO of the American Institute of Physics, commented: "The blue LED is a fundamental invention that is rapidly changing the way we bring light to every corner of the home, the street and the workplace - a practical invention that comes from a fundamental understanding of physics in the solid state."

Steve DenBaars, who has worked closely with Nakamura at UCSB for more than a decade, said: "His work has resulted in new industries in clean technology, and in reducing energy consumption for illumination. Eventually, we expect the majority of all lighting to be done with LEDs."