Study paves the way for use in larger animals, where efficient optics will be important. 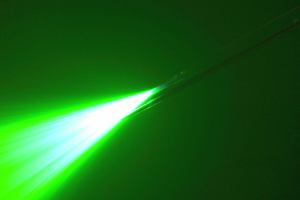 The promise of optogenetics as a technique to control the functioning of neurons in live animals continues to entice scientists. But research is still at an early stage, with the majority of studies having so far been carried out on small animals or other readily controllable subjects.

A team at Brown University, Rhode Island, has now carried out what it believes to be most rigorous direct comparison to date between optogenetics and conventional electrostimulation as competing methods to control the behavior of neurons in larger subjects. The work was published in Current Biology.

The intention was to help clarify the applicability of the technique to larger animals, a goal that will also require the light-delivery systems used in optogenetics to become as versatile and flexible as possible, and be optimized for different classes of test subjects.

David Sheinberg, a professor of neuroscience affiliated with the Brown Institute for Brain Science, and his fellow researchers devised an experiment to compare the effects of optogenetics and electrostimulation on the visual decision-making behavior of two primates. Stimulation of certain neurons can bias the animal's decisions when it chooses between similar visual shapes, and allow the effectiveness of the two techniques to be assessed.

Over scores of tests, the primates made thousands of choices between a T-shape and a distracting character in their field of view, with one choice leading to a reward. Choices were made while the animal was subject to either kind of neural stimulation, or to none. According to the announcement of the team's findings, electrical and optical stimulation showed essentially similar effects in biasing the decisions, compared head-to-head in a statistical analysis.

"Our results demonstrate the power of optogenetics as a viable alternative to electrical microstimulation for the precise dissection of the cortical pathways of high-level processes in the primate brain," Sheinberg said. "The goal is now to expand this and use it again as a daily tool to probe circuits in more complicated paradigms."

Light delivery
This direct comparison between techniques has brought the potential advantages of the newer optical technique into focus.

"Compared to electrical stimulation, light stimulation allows simultaneous artefact free recording, which is a huge boost as we can directly monitor effects of the light modulation," Sheinberg commented to Optics.org. "The granularity of the approach is most promising for the future."

In particular, Sheinberg noted that the molecular biology synthesis techniques that allow the cells to become light sensitive are being refined all the time, which will allow researchers to optimize their targets and affect particular cell classes in preference to others. This is easier in transgenic animals, mice in particular; but even for primates, there are tricks that can be used.

"In addition, because of the biological aspects of the transduction step, wherein viral vectors are taken into cells, we can transduce cells that ultimately project to a completely different area, away from the target of the light," said Sheinberg. "Then we can know that the activated cells are the ones projecting from a particular region, and hence know even more about them."

As other optogenetics studies have already demonstrated, one consideration for any experimental trial is the effective delivery of light to the neurons in the subject's brain. New methods and miniaturized light sources are currently under development, but most experiments require the animal to be tethered by an optical cable attached to its skull.

Already a potentially difficult arrangement, the use of optogenetics on larger animals may bring further practical difficulties, although Sheinberg believes that the optical aspects of his study of primates did not present any particular bottleneck. Instead, the biggest hurdle proved to be getting the transduction of the special light sensitive channels working in larger animals.

"The approaches used for larger subjects will actually be quite similar to existing methods, but this is still early days," said Sheinberg. "These experiments involve long fibers and stationary animals. We need to sterilize the fibers, and in our case, prepare them by connecting to a recording electrode, but the approach is actually not too different from that used in other animals."

The project's next steps will see further optimization of the optical aspects of optogenetics, probably using LEDs as the most suitable light sources, alongside the investigation of broader areas of the brain.

"We want to develop smaller and more distributed light delivery systems, allowing us to insert patterns of stimulation under light control," commented Sheinberg. "Smaller chronic setups will be very useful and potentially can stay on the animals all the time. There are also other constructs to be tested, especially channels that inhibit activity in order to create instantaneous and reversible 'lesions.' We would also like to start combining optogenetics with functional MRI recordings, so we can see the effects of stimulation across the whole brain."