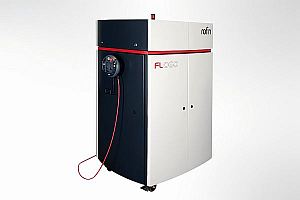 Rofin-Sinar sales dipped in the first quarter of fiscal 2014 and came in at the low end of the company's previously published guidance, according to CEO Günther Braun.

Total sales for the developer of laser sources and materials processing systems reached $121.2 million during the quarter, down by 15 percent compared to the equivalent period of last year.

Net income also dipped, falling to $2.2 million from the $8.9 million posted in Q1 2013, but none the less representing the high end of the prior guidance.

"The quarterly highlight was order entry, which increased our ending backlog by $19.4 million quarter-on-quarter," commented Braun. Rofin figures showed that Q1 2014 order entry increased by 2 percent year-on-year to $140.6 million, resulting in a backlog of $137.4 million by December 31 2013, mainly for laser products.

Overall sales reflected the varying fortunes experienced by Rofin's business areas during the period. The company shipped 1011 laser units in Q1, a fall of 27 percent year-on-year. Of these, 487 were for macro applications, up from 438 for the equivalent quarter of 2013. Systems for micro and marking applications fell from 954 to 524 on the same basis.

As a result, sales from the macro business increased by one percent to $49.1 million, and accounted for 41 percent of total sales, driven mainly by the machine tool industry. "Lower sales of high-power CO2 units for macro applications were offset by more units of low-power CO2 and high-power fiber lasers," commented Braun, who also noted that "the outlook for high-power lasers in machine-tool systems is still not clear."

However, sales of the company's systems for marking and micro applications decreased by 27 percent to $56 million, and represented 46 percent of total sales. Semiconductor and electronics businesses were described as reasonable and slow respectively, and Braun confirmed that the quarterly results involved essentially "no solar business."

"Last year's first quarter included multiple orders for consumer electronics applications, that were missing from this quarter," he said. "But there are going to be new opportunities in this sector, particularly around the marking and cutting of new materials."

The CEO indicated that he expected European and North American business conditions to improve throughout the calendar year, although the fortunes of Asian business will be heavily dependent on China's ability to maintain the current growth rate of its economy.

Fiber laser modules
Rofin's attack on the fiber laser market continues to be focused on increasing the efficiency of its laser modules, in order to make the overall systems more cost effective.

"We moved to production with our 200 W pumping modules and have a new 1.5 kW fiber laser module to offer," said Braun. "This means our 3, 4 and 6 kW systems have already seen cost savings and will continue to do so."

The company also said it was on track with development and testing of new modules and combiners, aimed at increasing the output power of each fiber laser box to 2 kW.

"We carried out the first lifetime tests, starting in December," said Braun. "The tests delivered good, I would even say encouraging, results. During fiscal 2014, we will capitalize on our efforts to optimize the cost structure of our fiber laser portfolio to the benefit of our profitability, and new product introductions in the short-pulse technology space should help us to grow the business."

In a separate announcement shortly before the quarterly figures were released, Rofin said it had reached agreement with IMRA America to license specific IMRA patents relating to the control of laser-induced breakdown and ablation. The patents, licensed to IMRA by their inventors at the University of Michigan, were described by Rofin as "fundamental in taking advantage of ultrafast lasers for micromachining."

•  Shares in Rofin rose by 6 percent in the period before the quarterly earnings announcement, before falling slightly to finish the day 4 percent up.