Novel solar cell based on TiO2, graphene and perovskite

Achieves high efficiency of 15.6% with potential for low-temperature, bulk manufacture. 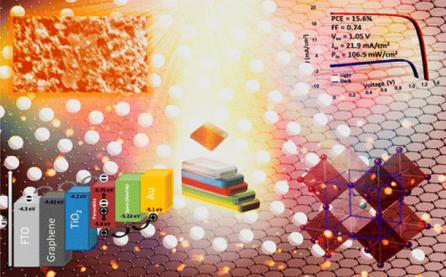 A collaboration between photonics researchers in Spain and the UK has developed a novel solar conversion device that promises high efficiency, low-temperature bulk manufacture of solar cells.

The Photovoltaic and Optoelectronic Devices group at Jaume I University of Castellon, Spain, directed by Juan Bisquert, Professor of Applied Physics and researchers from the University of Oxford’s Clarendon Laboratory, UK, led by Prof. Henry Snaith, have created and characterized a novel photovoltaic device based on a combination of titanium oxide, graphene and perovskite.

The perovskite solar cell was highlighted in Science's Top 10 Breakthroughs of 2013. It is with this material that the group at the University of Castellon has made pioneering contributions.

The attractive aspects of the new development are its relatively high efficiency – 15.6% – and its low manufacturing temperatures, with layers processed at below 150°C. The researchers say these factors could make it suitable for large-scale industrial manufacture, due to its likely low cost of production and potential for use in plastic flexible devices. The work based on investigations by the team into photovoltaic-based solar cells using a combination of solid pigments and perovskite was first published earlier in January in the journal Nano Letters.

Jacob Wang, one of the researchers at Clarendon Laboratory told optics.org, “Our solar cell is based on the combination of perovskite, titanium oxide and graphene. The graphene acts as a bridge, speeding up the electron transport process. It definitely has the potential for large-scale manufacture. The low temperature process is advantageous because we are saving a lot of energy in the fabrication.”

“Our cell design is quite robust; it will definitely be developed into a low temperature manufacturing process. What we are trying to achieve in our solar cell design is the optimal balance between transparency and absorbency. Previously, many cell designs required sintering at over 500°C, which uses a lot of energy, but with the new Clarendon-Jaume I process, only 150°C is required.”

Prof. Henry Snaith, supervisor of the Clarendon side of the project, is also founder and chief scientific officer of Oxford Photovoltaics, a spin-out from the University of Oxford, which has exclusively licensed the rapidly growing portfolio of intellectual property developed by Snaith and his academic team of 17 scientists. 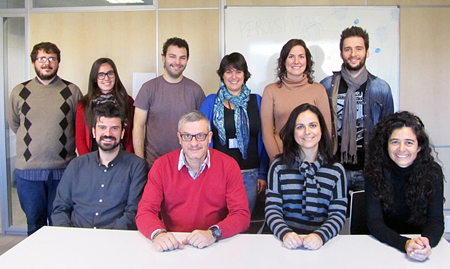 Bisquert's team from Jaume I University of Castellon.

Juan Bisquert commented on the recent breakthrough on his blog, “We think we have achieved some important new insights. We have observed the transport coupled with recombination process in perovskite solar cells by the standard signature of transmission line pattern in the impedance spectroscopy spectra.

”We studied different types of cells: thin film devices on the one hand, and nanostructured devices including a metal oxide framework, on the other. Despite the conspicuous differences of the samples in terms of perovskite material, growth method, sample configuration or selective contact to electron, similar behavior was observed indicating a common and general working mechanism in perovskite solar cells.”

”The results here reported will contribute to the development of a complete model of the working principles in perovskite solar cells and could have important implications in the optimization and characterization of this technology.”