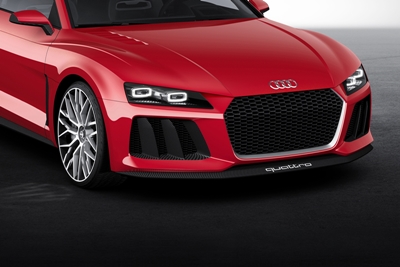 Car manufacturer Audi has demonstrated a concept car featuring laser headlamps, following the lead of its German rival BMW in the field of new forward-lighting technologies.

In the car’s dual headlamps, Audi has combined both matrix LED and laser technologies. Two low-profile trapezoidal optical elements are visible within the headlights. Audi explains that the outer element generates the low beam light using matrix LEDs and an aperture mask, while the inner element produces laser light for the high-beam.

One advantage of using laser diodes is that they are significantly smaller than LEDs; only a few microns in diameter. Despite that, they are able to Illuminate the road ahead for nearly 500 meters, Audi says.

That is equivalent to approximately twice the lighting range and three times the luminosity of an LED-based high beam, adds the firm.

The appearance of Audi at CES – the company is also giving a keynote presentation at the event – highlights the growing convergence between what until recently have been the largely separate worlds of the automotive and consumer electronics industries.

That is changing quickly, with Audi highlighting a new user interface in the “laserlight” concept car that is based on a menu structure similar to that more typically seen in a smart phone.

Lightweight design
Audi has always been at the forefront when it comes to automotive innovation, and it is often a first-mover regarding the introduction of laser production technologies

If the laserlight concept transfers into volume production, lasers are likely to be crucial for making large parts of its lightweight design, which is based on ultra-high-strength steel sheets, structural elements of cast aluminium and carbon-fiber reinforced polymer (CFRP).

Audi says that the doors and fenders are made of aluminum, while the roof, engine hood and rear hatch are made of CFRP. This results in an unladen weight of just 1,850 kilograms, including the large battery pack needed for the hybrid electric drive.

However, Audi is not the first car maker to show off laser-based headlamps. Last year, BMW told optics.org that its system – based on blue laser diodes and a remote yellow phosphor – offered a luminance ten times superior to an LED-based headlamp. 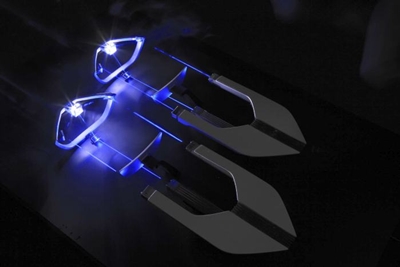 "The benefit and selling point for customers is a high-beam range which has never been seen before, close to the limit allowed by [European] regulations, but it does not require a large headlamp. Instead it comes out of a small reflector, assisting with aerodynamics and reducing weight,” explained BMW project manager Stefan Weber.

BMW showed off the laser lighting concept in its “i8” hybrid sports car at last year’s Frankfurt Motor Show, and Weber indicated that a similar system could move into production before the end of 2014.

Last year Audi used the CES show to demonstrate another new lighting concept. Its laser-based tail light could – if approved by regulators – indicate safe driving and braking distances to following vehicles. However, because it would involve the projection of coherent light outside the vehicle, this would require significant changes to safety regulations.

In the meantime, the next major innovation in car headlamps looks certain to be adaptive lighting such as Audi's matrix designs, where LED-based forward lighting systems respond automatically to road conditions.