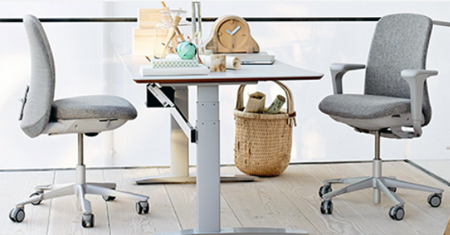 Operations run automatically when assembling most chair parts but when the five castors need to be fitted, human intervention is necessary to orient the components so that the vision-guided robot can pick them up and insert them into the correct place.

Now scientists from research agency SINTEF ICT, based in Trondheim, 100km further north, have developed a new vision solution that makes such production more automatic and effective – and reduces costs. This development is part of a program called Next-generation Robotics, a “KMB” (knowledge-building) project funded by the Research Council of Norway's User-driven Research Based Innovation programme, and managed by SINTEF ICT.

At SINTEF's laboratory in Trondheim, researcher Sigurd Albrektsen is calibrating the settings of robotic arms and the associated vision systems to better inspect and select pieces from a randomly arranged box of castors. One of the robots is fitted with a gripper tool, while the other has 3D vision system, based on laser and advanced camera, which can recognize not just the parts but also identify their orientation and position.

He comments, “The robotic gripper can now pick up castors in four different ways. That is important, because the castors are all in different positions."   Since SB Seating produces one chair every 20 seconds, the SINTEF ICT researchers needed to enable the robot to pick out a castor every 4 seconds. 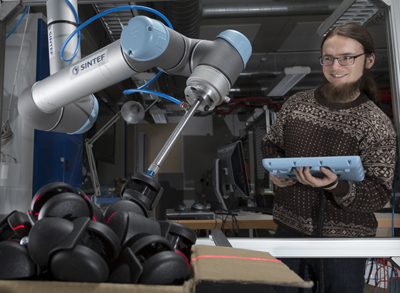 Albrektsen added, "Now the robot can effortlessly picks up one castor after another from the pile in the box and put them into the right channel. No matter how the wheels are lying, the robot manages to get an exact grip."

Svein Peder Berge, Senior Scientist at SINTEF ICT, explained that “bin-picking” has been a problem with which all manufacturing robot researchers have been grappling for many years. "Conventional pick-and-place robots are very good at picking up parts arranged in specific positions, but not if they are unsorted in a box.  Now we can use a CAD model to inform the robot which castor to pick up. We can teach the robot to recognize a castor and its position in the box, so that it can grip it accurately and pick it up, regardless of its starting orientation.

Stein Are Kvikne, Vice President Production Development at SB Seating, said that picking up castors was chosen as the most relevant task because the company currently uses a robotic assembly cell to mount castors into the foot socket.

"At the moment, the wheels have to be picked up manually and arranged by an operator. This job is challenging for a human being, and not ideal from a health and safety perspective. This consideration is uppermost when we automate this particular operation", said Kvikne. "We will also get further productivity benefits in the form of a better working environment, enabling us to make better use of the operator's core skills."

Kvikne added that SINTEF's robot development promises applications to other fields beyond picking out chair castors: "This work demonstrates a generic technology in which many different components can be handled by the same system. The combination of 3D vision, a flexible robot/gripper and a 3D CAD model of the component means that we can pick the component directly out of the transport packaging without any extra handling.   We are now very close to having a system in which we would like to invest, both from a technological and a financial perspective", Kvikne said.

By developing the skills of Norwegian researchers and industrial partners, next-generation robotic technology is expected to help to develop new technologies and innovative robotic systems.  The project is being run for five years (between 2009–2014) with a budget of NOK 36 million ($5.87 million). It forms part of the research carried out by four PhD students linked to the Norwegian University of Science and Technology's (NTNU's) departments of Engineering Cybernetics and Production and Quality Engineering.