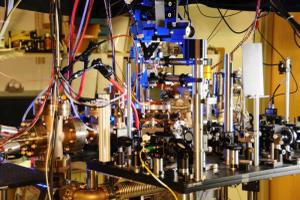 A pair of ytterbium atomic clocks developed at the National Institute of Standards and Technology (NIST), Colorado, have set a new record for stability.

Results published in Science Express showed that the clock's stability, meaning the degree to which the duration of each "tick" precisely matches the duration of every other "tick," was roughly ten-times better than the previous best published results, according to the authors.

The new clocks were stable to within two parts in one quintillion, or 1018, after seven hours of averaging; a result described by the team as unprecedented.

Atomic clocks work by cooling groups of atoms to very low temperatures, and then deliberately inducing specific electronic transitions using an outside source of energy. These transitions take an inherently fixed and extremely short length of time.

For example, the internationally agreed definition of one second is 9,192,631,770 cycles of radiation corresponding to the transition between two particular energy levels of the caesium-133 atom.

These standards are based on microwave oscillators, but the use of lasers instead allows optical clocks to oscillate many times faster, dividing periods of time into finer intervals.

NIST's devices are optical lattice clocks, in which groups of ytterbium atoms trapped in an optical standing wave created by laser are effectively cooled to temperatures of only a few micro-Kelvin, and then irradiated with a separate 578 nm laser of very high stability. This induces the desired "clock transition." (In practice, a further laser system operating at 1388 nm is also involved as an optical pump.)

"We used a highly stabilized low-noise laser to drive this electronic transition," said Andrew Ludlow of NIST. "In principle you might hope that the performance of the laser would not play a limiting role in these clocks, since the idea is to tap into the internal 'ticking' of the atoms and that should be a much better 'tick' than anything from the laser. But in practice, with several different processes that can potentially affect the laser noise, it can be the limiting factor."

One common approach to ensuring the laser remains stable in these applications has been to use passive optical cavity resonance; if the optical cavity can be kept very stable in length, then the laser's frequency should remain locked.

Other problems can remain though, including the inherent thermal-mechanical noise arising from the motion of molecules in the cavity mirrors and other surfaces, a factor which represents a "hard limit" to the stability and is difficult to overcome.

NIST deployed a number of such strategies to tackle the thermal noise and reduce it sufficiently to achieve the clock's performance. "For example, if you design the cavity such that the cavity mode at the mirror location is quite large, then the spatial average over this area will reduce individual thermal effects," noted Ludlow. "These techniques are fairly widespread, but we effectively combined a number of different ones and took them to a higher level."

Out of the laboratory
Having established the precision of the devices, the team are also now assessing their absolute accuracy. In the world of atomic clocks, official accuracy is reserved for devices using caesium atoms, rather than the ytterbium used in the NIST device.

"Caesium clocks define the second, and ultimately other clocks must be referenced to a caesium clock to claim true accuracy," commented Ludlow. "The primary result we have published is our clock's stability, but we are currently busy working to make sure that the accuracy is on a similar level."

The improved timing provided by devices such as the NIST clock might prove to be valuable in several pure science experiments, such as testing more precisely whether different strengths of gravitational field away from the Earth's surface affect the passage of time in line with the predictions of general relativity.

A clock as accurate as the new NIST devices might also be able to detect changes in this gravitational redshift at the surface of the Earth, perhaps able to resolve spatial and temporal fluctuations equivalent to 1 cm of elevation in Earth's gravitational field. Such variations in gravitational potential over small distances might be hard to measure by any other technique, but could be useful in geodesic measurements, climate change studies or other fields.

Improved performance in navigation and communication systems, areas where atomic clocks have already had significant impact, could also follow.

"At present these clocks are essentially physics experiments, needing the kind of support apparatus and housing that that suggests," commented Ludlow. "But now that we are achieving these new levels of performance, there will be a significant push to make these systems smaller, cheaper and more robust, potentially allowing them to move out of the lab."