Photonics-based innovations for all industry and applications to be recognized in annual competition. 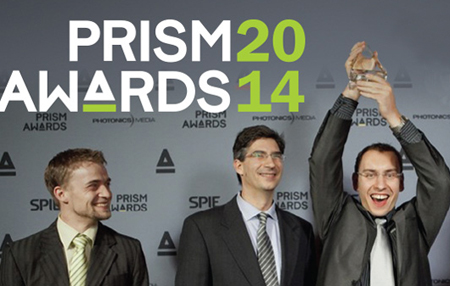 Prism Awards are seen as boosting visibility and credibility.

The entry period for the competition has now entries has been extended through 11 October 2013 for the prestigious 2014 Prism Awards for Photonics Innovation. The extended deadline reflects a permanent change in the awards program, in response to industry requests to move the qualifying date beyond the busy late-summer period.

A panel of international photonics industry experts will be judging entries submitted. The annual competition recognizes new products and inventions that break with conventional ideas, solve problems and improve life through the generation and application of the essential technologies of optics and photonics.

The Prism Awards are seen as boosting visibility and credibility for companies with the most creative product inventions annually. Products that have or will have been sold, delivered or launched between 1 January 2013 and 6 February 2014 are eligible.

Companies may enter one product for multiple categories or multiple products in separate categories. Entries are being accepted through 11 October, in categories including: advanced manufacturing, defense and security, detectors, imaging and cameras, industrial lasers, communication, life sciences and test and measurement.

Finalists will now be announced in November 2013 and the category winners will be announced 5 February at a gala banquet held during SPIE Photonics West in San Francisco. The competition is judged by an independent panel of industry experts including innovators from top companies, leaders in academia, business developers, previous award winners, financial experts, and much more. Judges for the 2014 awards are listed on the competition website.

Several 2013 Prism Award winners have gone on to collect further honors since last February’s presentations, and a number of companies have reported advances with their winning products. Among these:

• Heidelberg Instruments has added a second write mode, a new light source option and other features to its MicroPG501 desktop-based maskless aligner.

• TAG Optics’ Lens 2.0, a new type of microscope lens that focuses in response to sound waves, has been piling up additional awards, and fine-tuning processes in order to meet rapidly increasing demand.

• Verisante Technology has completed a full launch of its Aura skin cancer detector throughout clinics in Canada, with additional units in Europe.