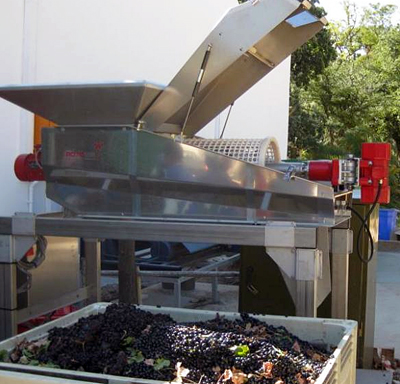 “GrapeSort” is funded by Germany’s Federal Ministry of Economics & Technology.

No winemakers want their product to have a bitter note to it. Now, new sorting equipment based on an optical recognition system can ensure this is never the case; the machine sorts the harvest into quality grades – sparing winemakers laborious manual work. In Germany, where the optical grape sorting device has been developed, the weather can often ruin the harvest for winemakers: the novel sorter is expected to help make the most out of grapes’ variable qualities.

Researchers from the Fraunhofer Institute for Optronics, System Technologies and Image Exploitation IOSB in Karlsruhe are developing the equipment together with Armbruster Kelterei-Technologie, Ingenieurbüro Waidelich and Geisenheim University in the “GrapeSort” project, which is funded by Germany’s Federal Ministry of Economics and Technology, BMWi.

The tasters are said to be “overjoyed” with the results: according to the Fraunhofer IOSB, of more than 100 wines submitted for testing, a rosé produced using the new grape tester is “of exceptional quality – fresh, dry, pleasant – a real summer wine,” said one reviewer. “Incredibly well rounded,” said another, while praising “its harmony and the balance between sugar and acidity”.

Once the vats of grapes have been delivered to the winery, their contents pass through a feeding unit into the destemmer provided by Armbruster, which separates the berries from their stems. Next, the grapes are individually placed on a conveyor belt by a newly-developed conveying system.

Dr. Kai-Uwe Vieth, from the Fruanhofer IOSB, explained, “What’s important is to get the berries onto the belt without damaging them. The grapes are then carried along by the conveyor belt past ours sorting module at a speed of 3m per second. At the heart of the module is a high-speed line scan camera that records the material flow, taking photos of the fruit as it rushes past – 18,000 times a second.” 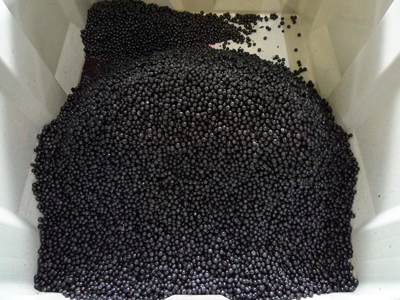 Grape expectations: good fruit is separated into the container.

IOSB analysis software evaluates each image in milliseconds and controls compressed air jets that blow foreign objects such as insects, vine shoots, stones or twigs out of the material flow. Bad or undesirable berries are also removed by the Waidelich air ejection unit. The good berries are directed into a container.

Vieth adds, “Our sorting module exceeds the capabilities of current sorting machines. Not only does it remove foreign objects, it also sorts the berries into various quality grades, which allows winemakers to create exactly the wine they want.” The camera is programmed to separate out mold, insects, leaves and grapes of the wrong degree of ripeness - based on rapid analysis of shape and color.

The researchers say they are already able to use their equipment to recognize various degrees of berry ripeness based on nuances of color. In future, they also want to be able to tell the ripeness by investigating how much sugar there is in the fruit.

“Winemakers typically measure sugar content with an optical refractometer, which allows them to determine the degree to which sugar molecules in the must [grape pulp] influence the angle of refraction of incoming light. The higher the sugar content, the more the light is refracted. The line scan camera can also measure reflected light, as it is a light-sensitive line,” Vieth explains.

This integrated line sensor is sensitive to both visible and invisible light. For the laboratory analyses that run while the measurements are taken, Vieth and his colleagues use imaging sensors for the wavelength range of 240 to 2500 nanometers. The sensors generate spectra for each pixel. An optimized functioning prototype that will serve as a basis for a production-ready facility is set to be tested for the first time in October 2013.