To advise Commission for Corporate Governance – based on his success with Jenoptik. Michael Mertin Chief Executive Officer of Jenoptik AG, Jena, Germany, has been appointed as a member of the German Government’s Commission on Corporate Governance Code, starting on September 30, 2013.

The Commission reviews standards for good, responsible corporate management and supervision. Mertin will start his new role just a week after the forthcoming national German federal election, which takes place on 22 September 2013.

Mertin, who is also President of European photonics association Photonics 21, says he will take his substantial experience as the longtime CEO of Jenoptik to his role at the Commission.

He commented, "The basic principles of responsible and value-oriented corporate management are essential to build a foundation for long-term sustainable success of the company. Good corporate governance helps strengthen the trust of shareholders, customers, employees, and also makes it possible to manage risks appropriately."

As a new member of the Commission, Mertin intends to continue what he calls the intensive dialogue with politics and society. "We have to succeed in conveying that good corporate governance also contributes to social peace. The principles of corporate governance set the frame for companies to be successful in the long term as well as to be internationally competitive."

Besides Mertin, two other business moguls have also been called to participate as members of the Commission: Joachim Faber (chairman of the supervisory board of Deutsche Börse AG) and Thomas Kremer (member of the board of management of Deutsche Telekom AG).

Mertin has been CEO of Jenoptik AG since 2007. The studied physicist is also an active member of various economic organizations and technology associations. He has served as the president Photonics21 since November of 2012. In June of 2013, he was elected vice-president of the Economic Council to the CDU e.V. And he is also the chairman of the board of trustees of the Frauenhofer Institute for Applied Optics and Precision Engineering (IOF) in Jena and a member of the board of the Spectaris high-tech association. 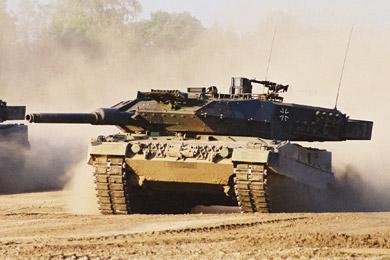 Jenoptik’s Defense & Civil Systems division has just announced that it has won an order equip a total of 62 Leopard 2 tanks with series production units for the mirror head by mid-2016. The order "in the single-digit million euro" range has been received from a German systems company that develops security and defense technology.

The series production units for the mirror head are part of the Leopard 2 gunner’s targeting device. They help to stabilize the field of vision when the tank is moving over uneven terrain.

Mertin commented, “Jenoptik has been a key supplier of subsystems and components for military land vehicles such as the Leopard 2 for many years. The order for the Leopard series once again shows that our solutions are at the cutting edge of technology.”

Jenoptik had already announced a major order for the Defense & Civil Systems division in June 2013. This involved the delivery of NYXUS BIRD thermal imaging target acquisition systems to upgrade the equipment used by the German Armed Forces.