A new report predicts strong growth over the next six years. 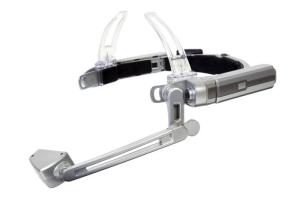 The Golden-i HMD from Kopin

A combination of technical advances and lower component costs is helping to push head-mounted displays (HMDs) into new application areas and promote market penetration, according to a new market report.

Prepared by Transparency Market Research of Albany, NY, the report calculates that the global HMD market was worth $342.7 million in 2011, and is set to rise significantly to $9,275 million by 2019, at a compound annual growth rate of 55.3 percent.

According to the report's summary, advances in the provision of high-resolution images and 3D viewing are driving the increased penetration of HMDs into the consumer market. As a result this sector is expected to show the highest growth rate of all, a striking CAGR of 71.8 percent over the period covered by the survey.

Health care is likely to be another strong market, as HMDs are increasingly adopted by clinicians for use during a range of surgeries and procedures. New applications of virtual reality displays in automotive prototyping and design are also expected to open new opportunities for HMD.

The largest end-use market of all, however, is likely to remain the defense sector, valued in the report at $319 million for 2012.

Helmet-mounted displays accounted for around 58 percent of the overall HMD revenue in 2012, but the market for wearable glasses is expected to eventually surpass that figure, as demand for lightweight head-worn devices grows.

The report found that North America was the market leader in 2012, although Asia Pacific is predicted to become the fastest growing regional market over the period, with an expected CAGR of 60.7 percent. This is mainly owing to the increasing demand from medical and consumer market segments in the area, according to the authors.

• Advances in microdisplays for near-to-eye applications have accelerated in recent years, as developers have found ways to create high-resolution devices in acceptably small packages.

Forth Dimension Displays, a UK-based developer and subsidiary of Kopin, unveiled its QXGA microdisplay in September 2012 and believes it to still be the highest resolution full-color near-to-eye microdisplay currently available. It employs 3.1 million pixels in a 2048 x 1536 array, and is a full-color upgrade to a high-resolution monochrome microdisplay previously sold by the company.

At the time the QXGA was released in 2012, Kopin had just cut its sales guidance for the then-current financial year by nearly 20 percent after a key customer in the defense sector announced a spending review.

The company's most recent quarterly financial results for Q2 2013 quoted a fall in revenues to $6.1 million, compared with $7 million for the second quarter of 2012, and indicated that those figures also reflected a decline in sales of display products for military applications.

Kopin CEO John Fan said at the time of the quarterly report that the company is "in the process of transforming its business model from one that has been primarily commodity-based to one powered by providing innovative solutions for wearable devices with the opportunity to generate substantially higher gross margins."