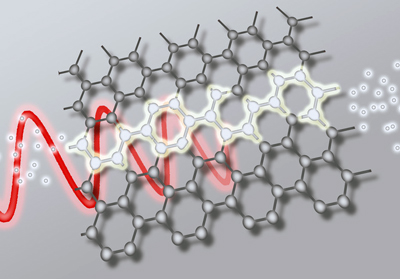 Today, most information is transmitted by light – for example in optical fibres. Computer chips, however, work electronically. Somewhere between the optical data highway and the electronic chips, photons have to be converted into electrons using light-detectors.

Scientists at the Vienna University of Technology have integrated a graphene photodetector with a standard silicon chip. The hybrid device can transform light of all important telecommunications frequencies into electrical signals. The scientific results have now been published in the journal Nature Photonics.

Both academia and the industry are placing high hopes in graphene for many different applications. Two years ago, the team of Thomas Müller (Institute of Photonics, Vienna University of Technology) demonstrated that graphene is ideally suited to convert light into electrical current.

Müller commented, “There are many materials that can transform light into electrical signals, but graphene allows for a particularly fast conversion. So wherever large amounts of data are to be transmitted in a short period of time, graphene will in the future probably be the material of choice.” 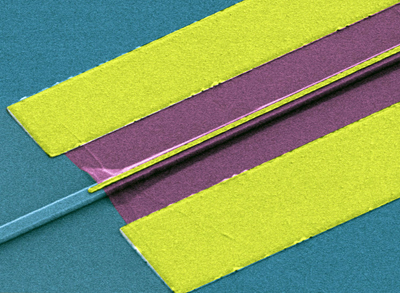 The researchers had to come a long way from the basic proof of what the material can do to actually using it in a chip – but now they have succeeded. The Viennese team worked together with researchers from the Johannes Kepler University in Linz.

Müller added, “A narrow waveguide with a diameter of about 200 by 500 nanometers carries the optical signal to the graphene layer. There, the light is converted into an electrical signal, which can then be processed in the chip. There have already been attempts to integrate photodetectors made of other materials, such as germanium, directly into a chip. However, these materials can only process light of a specific wavelength range.”

The researchers say that they can show that graphene can convert all wavelengths which are used in telecommunications equally well. The graphene photodetector is not only extremely fast, it can also be built in a particularly compact way: for example, 20 000 such detectors could fit onto a single chip with a surface area of 1cm2. Theoretically, the chip could be supplied with data via 20,000 different information channels.

”These technologies are not only important for transmitting data over large distances. Optical data transmission also becomes more and more important for communication within computers”, says Thomas Müller. When large computer clusters work with many processor cores at the same time, a lot of information has to be transferred between the cores. As graphene allows switching between optical and electrical signals very quickly, this data can be exchanged optically. This speeds up the data exchange and requires much less electrical energy.