New multidisciplinary research center builds on photonics expertise at the University of Southampton. 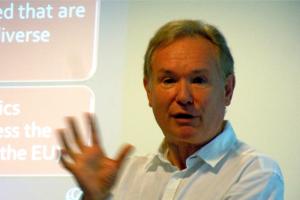 The Zepler Institute, a new research center bringing together photonics technologies and related expertise at the University of Southampton, has been officially launched. It is said to be the largest photonics and electronics institute in the UK.

Building on the existing photonics expertise within the University's Optoelectronics Research Centre (ORC) and other research departments, the Institute intends to facilitate multidisciplinary research into photonics, advanced materials, quantum technologies and nanoscience.

The Institute is led by Professor Sir David Payne, director of the ORC, and takes its name from Professor Eric Ernest Zepler, founder of the Department of Electronics and Computer Science at what was then University College Southampton in 1947. It includes 350 staff and PhD students, with facilities comprising around 100 laboratories, including those based in the University's Zepler Institute Cleanroom Complex.

Speaking at the Institute's launch event, Payne spoke about the deep roots of photonics research at the Southampton site, and the impact that research undertaken there has had. In particular the demonstration of a working erbium-doped fiber amplifier (EDFA) in 1987 has had a revolutionary impact on data communication and the development of the worldwide web.

"The University of Southampton had a pivotal role in development of the optical fibers that are now underpinning the internet," he told his audience. "The EDFA and the concept of incorporating an amplifier in the fiber itself changed the world in telecoms, and now again in manufacturing and materials processing. A key part of that success was the presence of both fiber and laser researchers here in the same group at Southampton."

Research currently under way at Southampton and at the Zepler Institute is expected to have similar revolutionary effects on photonics applications, according to Payne.

High-impact research
"We are running out of capacity," he said, describing the rapidly increasing amounts of data traffic arising from mobile devices and data streaming. "Video exceeded half of all global internet traffic in December 2011, and is increasing. The graphs of demand versus capacity predict something horrible happening in 2020. The business model must change."

Technology to improve that capacity could come from several projects underway at the Institute, including research into photonic-bandgap fibers designed to have much higher non-linear thresholds than glass. Another approach could be to increase the speed with which light travels through the material of the optical fiber.

"These are examples of the current high-impact research underway here," commented Payne.

He also discussed the ways being sought to increase the output power from fiber laser arrays, including hypothetical systems with peak powers high enough to play a part in processing nuclear fuels or recreate conditions of interest to cosmologists.

"The search for that kind of higher continuous laser power is on," he said. "We will not see such things in 5 or 10 years, but in about 20 years they will come to fruition."

Payne has spent nearly five decades in research at Southampton, and has seen the ORC recover from the setback of a fire in 2005 which destroyed some of the center's facilities. He was also instrumental in the spin-out of the fiber laser specialist SPI Lasers, later acquired by Trumpf for $40 million.

"There are now as many optical fiber drawing plants in Southampton as there are in the US," he said. "There are 700 alumni in key positions in the photonics industry all over the world, and ten companies in the Southampton area with origins in the ORC."