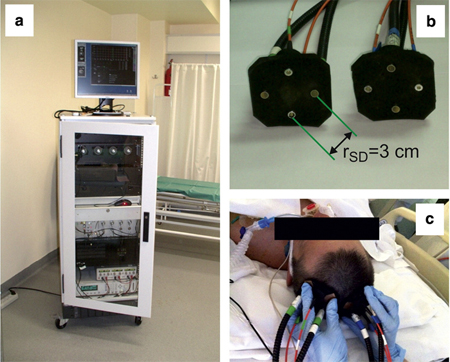 Understanding perfusion – the movement of nutrients and oxygen via blood to brain tissue – is of crucial importance in treatment of patients with severe neurological injuries. Conventional medical equipment does not permit continuous measuring of brain activity.

However, this situation is set to change thanks to an instrument allowing optical assessment of brain perfusion being developed at the Institute of Biocybernetics and Biomedical Engineering of the Polish Academy of Sciences in Warsaw.

The work on the instrument for brain perfusion assessment has been initiated at the IBBE PAS by Prof. Roman Maniewski as early as in the 1990s. At present, the research is undertaken by the team of Prof. Adam Liebert, who commented, “Earlier work on optical methods for brain perfusion analysis, carried out in clinics worldwide, has yielded ambiguous outcome. But the results of our research, obtained with advanced optoelectronic equipment, are more convincing.”

Optical methods for brain monitoring make use of the fact that skull bones are to some extent transparent to certain wavelengths, in particular in the near infrared range between 650 and 850nm. The properties of haemoglobin are also important - especially the fact that its oxygenated form interacts with light differently than the reduced form. This phenomenon allows the estimation of the degree of oxygenation in the body region of interest by analysing the intensity of light penetrating the tissue.

The essential elements of the Polish optical diagnostic devices are small light sources (laser diodes) and highly-sensitive detectors. The sources and detectors, usually placed at a distance of 2-5 cm from each other, are paired. Simultaneously, from a few to more than a dozen of such pairs can be placed on the patient's head, which allows examination of a substantial part of the brain. Recorded signals are transmitted via optical fibers to photomultipliers. After amplification, they are transmitted to a PC equipped with cards allowing for counting single photons.

Liebert adds, “The volume penetrated by light inside the skull resembles a banana in shape, with one end at the light source, and the other at the detector. At the point where the depth of photon penetration in the skull is at its maximum, we have reached the cerebral cortex. This means that a fraction of recorded photons has interacted with haemoglobin from the blood circulating in blood vessels of the external layers of the brain.”

The researchers have recently carried out measurements for a “record-breaking” distance between light source and detector, equal to 9 cm. Brain perfusion was assessed using indocyanine green – a well-known low-toxicity optical contrast agent in the clinical environment. The contrast agent was administered in patients by intravenous injection during the measurement.

Daniel Milej, a PhD student at the IBBE PAS, explains, “In the highest resolution mode, the images of both brain hemispheres obtained with our instrument consist of 32 pixels corresponding to source-detector pairs on the surface of the head. The relatively low spatial resolution is due to physical constraints. In optical observations of the brain, the phenomena related to light scattering dominate those resulting from light absorption. That's why the resolution of these images is significantly lower than that of tomography-based medical imaging methods.”

It is, however, not only the image resolution that determines the usefulness of the new set up. The primary advantage of the instrument from the IBBE PAS is that the measurements are non-invasive. Light emitted by laser diodes is safe and does not induce changes in tissues. Equally important is the simplicity of examinations. The measurement requires only that a cap with fixed optical fibres is placed on the patient's head and the patient is injected with a small dose of a contrast agent.

The examination lasts for a few minutes only and can be repeatedly carried out during the day. Moreover, the size of the measurement equipment in a lab, and so in a still non-miniaturised version, resembles a refrigerator. It is mobile and applicable at the bedside, even in critically ill patients treated in intensive care unit environment. It can also be used in an operating room. 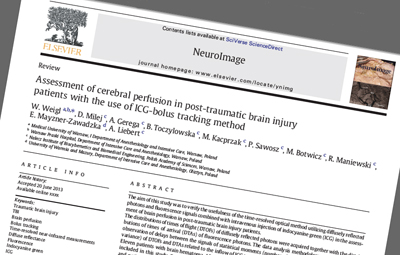 In collaboration with the Medical University of Warsaw and the Praski Hospital Department of Intensive Care in Warsaw, the researchers from the IBBE PAS have recently carried out optical measurements of brain perfusion in patients with post-traumatic brain injuries. Patients with cerebral edema and subcortical hematoma were included in the study. In both cases, differences with respect to signals collected in healthy volunteers have been observed. The results of the research have been recently published in Neuroimage journal.