Fermilab-built instrument begins its search for the mysterious material whose existence is used to explain the expansion of the universe. 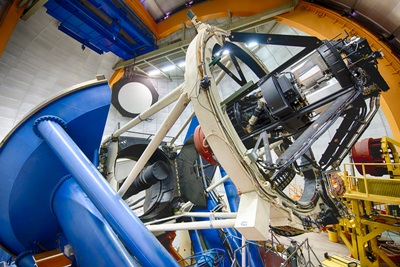 August 31 saw the start of a new five-year project to hunt for dark energy – using the world’s most powerful digital camera.

Scientists working on the Dark Energy Survey (DES) have just begun systematically mapping one-eighth of the night sky in unprecedented detail. By the end of the mission, they are hoping to have figured out why it is that the universe continues to expand at an accelerating rate, instead of collapsing under its own weight.

At the heart of the project, and now sat atop the 4 meter diameter Victor Blano telescope in the Chilean Andes, is a 570 megapixel camera featuring five huge but precisely shaped lenses that focus images over the entire field of view.

Known as the “Dark Energy Camera” it is described by the Fermilab scientists who built it as the most powerful survey instrument of its kind, able to see light from more than 100,000 galaxies up to 8 billion light-years away in each snapshot.

It features 74 individual CCD sensors optimized to be sensitive to the red-shifted wavelengths of light from distant stars and galaxies. The five lenses, each shaped precisely to correct for optical aberrations, are needed to produce the ultra-wide field of view, and the largest of them is almost a meter in diameter.

“The Dark Energy Survey will explore some of the most important questions about our existence,” said James Siegrist, associate director for High Energy Physics at the US Department of Energy’s Office of Science. “In five years’ time, we will be far closer to the answers, and far richer in our knowledge of the universe.”

“With the start of the survey, the work of more than 200 collaborators is coming to fruition,” said DES Director Josh Frieman from Fermilab, more formally known as the Fermi National Accelerator Laboratory. “It’s an exciting time in cosmology, when we can use observations of the distant universe to tell us about the fundamental nature of matter, energy, space and time.” 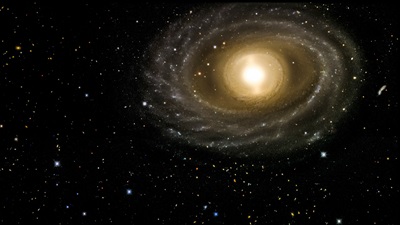 Optics challenge
The DES is partly supported by the UK’s Science and Technology Facilities Council (STFC), which funded production of the ultra-precise lenses by specialists at University College, London.

“Making these lenses has been the biggest challenge of my career,” said Peter Doel, who led the UCL lens production team. “I had a few sleepless nights worrying about dropping them as they cost over a million pounds to produce!”

Over the course of the next five years, DES is expected to generate color images of an astonishing 300 million galaxies and 100,000 galaxy clusters, as well as 4,000 new supernovae - many of which will have been formed when the universe was only half its current size.

Since dark energy cannot be viewed directly, its presence and properties will instead be inferred by studying the expansion rate of the universe through observations of the various celestial bodies. Four different methods will be used, namely: counting clusters of galaxies; distances to supernovae; the bending of light caused by gravitational lensing; and patterns in the distribution of galaxies.

UCL’s Ofer Lahav, head of the DES Science Committee, pointed out that one possible outcome is that the current explanation for universal expansion is even correct, saying: “One of the most challenging goals for DES is to tell if what causes the acceleration of the universe is indeed dark energy, or something entirely different.”

While DES is focused mainly on the optical part of the spectrum, its search for the effects of dark energy will be supplemented by additional data from the infrared region that will provided by the European Southern Observatory (ESO) VISTA telescope.

The scientific team says that using a combination of the two giant instruments will greatly improve their ability to estimate distances to all the galaxies, and to identify other mysterious, early-universe objects such as quasars.