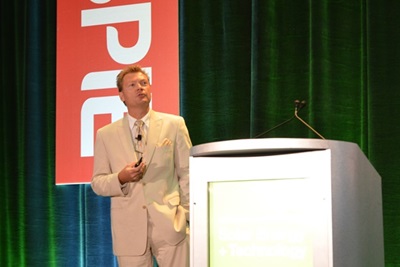 by Ford Burkhart in San Diego
As solar and wind power generation give utilities fits, so-called “smart grids” and new types of inverters are increasingly vital in smoothing out scrambled patterns.

The woes are many. Storage capacity for solar power lags behind the needs of electric utilities. Forecasting of cloudy days needs improvement. Wind and solar generate large, often unpredictable, fluctuations in power output that can scramble the grid.

All this can wreak havoc on utilities’ equipment and ultimately impact their customers. Meanwhile, new electric vehicles that draw from 3 to 10 kilowatts while on charge are putting heavy burdens on homes, and will impact future grid operations.

To cope with these issues, and to avoid potential blackouts and “brownouts” (a voltage drop causing, for example, lights to dim), the power companies are increasingly banking on more agile grids that are able to shift energy where it’s most needed using information from homes.

PV consistency
With consumers able to select preferences for their energy use, and appliance makers bringing out white goods capable of communicating with local networks, in theory a utility can adjust area generation to maximize efficiency.

Combined with the uncertainty of intermittent energy sources like PV, there are obvious challenges. Bialek said, “We need to make these PV systems operate more consistently, and perhaps couple them with their own storage to mitigate some of the ramps in daily use patterns due to clouds, and as the sun goes up and down.”

“Once you have a device that can communicate, the utility can better manage the grid,” Bialek added. “The energy storage devices and reactive power devices that are needed to mitigate the impacts need inverters with advanced functionality that allows them to dynamically respond to grid conditions.”

Smart grids, essentially power networks controlled via a communication backbone, are already being deployed by various utilities, and particularly in California, the Pacific Northwest and the East Coast. But that roll-out will inevitably take time.

“It’s a long road,” the chief engineer admitted. By 2020 California hopes to meet a Renewable Portfolio Standard, or RPS, that requires that 33 percent of energy is generated by renewable resources.

Currently, San Diego has about 26,000 rooftop units with a combined capacity of 190 MW, with the number of installations and installed capacity doubling every couple of years.