But latest survey highlights growing expectations of workers in the low-income regions of Asia. 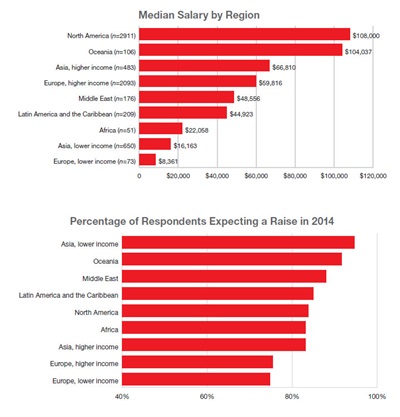 SPIE’s third annual survey of the global photonics workforce has once again found Switzerland to be an idyllic location – and not just because of the local scenery and high salaries.

On top of a median salary in excess of $127,000, 88% of photonics workers in the home of cuckoo clocks, precision timekeeping and multi-functional knives declared themselves to be enjoying their job, while fewer than one in ten work more than 55 hours each week.

As demonstrated by earlier surveys, the photonics workforce in general does enjoy a very high level of satisfaction. Overall, 85% said that they enjoyed their work, with 90% of the 6500 respondents adding that they respected the work of their peers.

Great expectations?
Perhaps unsurprisingly, at the bottom of the job satisfaction pile stand workers in low-income Asia, with “enjoyment” ratings of 71%, 73% and 74% for China, Malaysia and Taiwan, respectively. Their richer counterparts in Singapore may earn more than twice as much, but fare similarly on the satisfaction rating at 73%.

Despite those lower enjoyment ratings, the low-income Asia workforce also appears to be the most expectant in terms of future earnings. The SPIE survey found that 91% of workers in the region were looking forward to a raise in 2014 – compared with only 58% of lower-income Europeans.

The latter group were also found, surprisingly, to be the worst-paid photonics workers globally, with a median salary of just $8361 - well below counterparts in both Africa and India.

In terms of discipline, those working in the aerospace sector turned out to be the highest-rewarded, with a median pay of $113,500, up from $108,500 last year. Next in line are workers in the semiconductor industry, though after a tough year their median increased only slightly, to just over $104,000.

In summary: those wanting to earn the highest wages in photonics ought to look for an executive position at a large aerospace company in Switzerland – though in truth there aren’t too many of those jobs available.

And spare a thought for the humble writers and editors…lurking close to the bottom of the pile, sandwiched between lowly librarians and budding young researchers, with a median salary of $39,241.

• The full results of SPIE’s third annual Global Salary Report are available at the SPIE Career Center – the ideal place to look for jobs in photonics, from high-flying executive positions in Zurich to entry-level graduate posts.