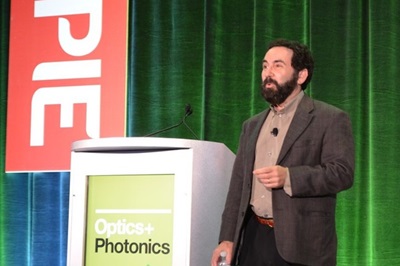 by Ford Burkhart in San Diego
Mention a huge vehicle in space with lasers that can zap an asteroid, and what comes to mind? Perhaps the Death Star of Star Wars movies fame? If so, Philip Lubin, with a wink, has succeeded with his intended joke.

“I have a sense of humor,” he told a rapt plenary audience at SPIE's Optics and Photonics symposium. But as one of the world’s leading experts on such futuristic projects, Lubin is dead serious.

An experimental cosmologist at the University of California, Santa Barbara, he kept a near-capacity audience on the edge of their seat with a presentation title evoking memories of Luke Skywalker and co. “DE-STAR: a Planetary Defense and Exploration System,” was, along with planet-hunting Jon Jenkins, one of two symposium-wide plenaries focusing on bold space ventures at the San Diego Convention Center.

Lubin’s DE-STAR laser system is shorthand for “Directed Energy - Solar Targeting of Asteroids and Exploration”. In concept, it could vaporize some space objects or – less dramatically - nudge them off a collision course with Earth with a little machining. It’s a stretch for the imagination, he admits.

“It’s hard, but it’s not impossible,” Lubin said. “We should take it seriously, it’s not science fiction.” He said it’s not a matter of ‘if’ we will do something along these lines, but ‘when’.

Yes, it will be very expensive, the professor admitted, adding: “What’s our planet worth?”

High-level discussions
Lubin indicated the seriousness of the idea, telling the San Diego audience that IBM had been in discussions with his group, while collaborators include the Pentagon, Lockheed Martin and others.

Advances in photonics and lasers makes what might had seemed fanciful in George Lucas’s movie a distinct, if still theoretical possibility. “This opens up using arrays of such lasers, phase-locked together, to focus on a small spot, at astro[nomical] distances, like from here to the Sun,” Lubin said.

“They can have a high enough power at a small spot to raise the temperature above the boiling point for all known elements.”

The applications go beyond just defense of Earth, including, for example, propulsion of a spacecraft. “To let a 100 kilogram robot spacecraft travel, light from a laser could be used as propulsion. Light has momentum and that light could push a spacecraft.”

Alternatively, DE-STAR could aid long-range communication in space, or signal other civilizations with similar technology - a nod to Jenkins’ space-themed plenary on the search for extra-terrestrial intelligence.

“Is it possible or practical at the moment?” Lubin asked, answering immediately: “No, given state-of-the-art launch capability.”

Mandate for detection
February’s meteor strike in Russia’s Ural Mountains – captured streaking across the sky on dozens of cameras as its shock wave shattered windows and caused scores of injuries – gave an extra edge to Lubin’s talk.

Caused by only a small asteroid, in astronomical terms, it brought attention to the topic in dramatic fashion. “A 20 meter diameter asteroid coming in at 12 km per second had the energy of a thermonuclear weapon,” Lubin said. “At a little lower angle, it could have caused tens of thousands of deaths, instead of only blowing out windows.”

If that meteor event happened over Washington, D.C., he said: “We would have as much funding as we could want. With it happening over Russia, it’s less so.”

Since the 1970s, Lubin added, there have been 140 major atmospheric events, or in his words, “things coming in at a very high speed.”

The Santa Barbara scientist referred to past events on a much larger scale, such as the mass extinction of life on Earth some 65 million years ago.

Now that we know how to predict such events, how are we going to protect Earth from them? “You go to Congress and ask them to mandate detection,” he said. “Tell them, ‘You shall detect 90 percent of all asteroids greater than 1 km.”

Science fact
So what exactly could be done? You could hit asteroids with nuclear weapons – though that might have unpredictable consequences. You could send a spacecraft to ram them, and shift their orbit a little. Or you could have a stand-off system, a high-energy laser to machine them away.

“It’s not so nuts after all,” Lubin said, adding that some of the ideas were based in a DARPA program on lasers in space:

“We said, ‘Why not scale it up? Use a phased array and see what the consequences are,” Lubin recalled. “This is science, and not science fiction. A few years ago, it would have been fiction, but now you can buy lasers, hand-held tactical weapons.”

“The reason is photonics. You are making this possible. You are supplying lasers that are incredibly efficient,” he said. “Using photons is more efficient than a thermonuclear weapon.”

Lubin presented dozens of graphs that showed how an asteroid would evaporate, or could be deflected rapidly, with the force of the lasers from the DE-STAR system. “It doesn’t take long to deflect it away from the Earth,” he explained. “Maybe a day or so.”

Those laser systems could, of course, be used for alternative purposes. Several audience members asked about DE-STAR being turned back towards Earth, or aimed at an airplane.

Lubin’s response: such a system would have to be a product of an international cooperative mission, so that no single country would be able to misuse it. “Preventing weaponization is very important,” he said.