by Ford Burkhart in San Diego
The cameras on Curiosity, the most ambitious Mars mission ever attempted, are yet to find signs of life: no microbes; no precursors. But hold on.

“This mission isn’t over yet,” says Roger Wiens, principal investigator of the ChemCam instrument team on the Curiosity Rover Mission. “Stay tuned over the next couple of years. When we get to Mount Sharp, you’ll see what we are going to do there.”

Mount Sharp is a critical destination for the rover, currently ambling across the Martian landscape at a tortoise-like tenth of a mile an hour. To huge public interest, it landed on Mars in August 2012. A year later, and Wiens told the optical engineering plenary session at the SPIE Optics and Photonics Symposium: “We are now a fifth of the way to the gateway to the mountain.”

So far, the cameras have sent back data on 80,000 laser shots, and a thousand images. “They are very versatile and the images are exciting,” said Wiens, in a presentation entitled, “Zapping Rocks on Mars: Exploring the Red Planet with Curiosity and its Laser”.

ChemCam employs laser-induced breakdown spectroscopy (LIBS) to create a plasma on the surface of target rocks and assess their elemental make-up, in part to evaluate the potential for life on Mars, to study possible carbon compounds as the chemical building blocks of life. That will reveal its past habitability and the possible roles of water.

“It’s been a fantastic year on Mars,” Wiens said. “We’ve never seen such things, and there have never been such instruments on Mars.”

The car-sized, nuclear-powered rover is full of analytical equipment and is expected to make the most intensive examination of Mars ever. Wiens described the ChemCam aspect, developed with French partners at Thales Optronics, as: “chemistry, quick and dirty.”

Rich spectra
Its diode-pumped Nd:KGW laser targets rocks up to 23 feet away. The colors of the plasma generated reveal the composition of the rock, and the data is sent back via the biggest optical device ever placed on the surface of Mars. Those spectra, Wiens said, are “rich in information.”

The 950 kg rover will eventually reach the 5 km-high Mount Sharp, in the middle of Gale Crater. Viewing it is a little like looking at the Grand Canyon, with colorful rock layers. “That’s the destination,” said Wiens, who said the mission was a “$2.5 billion dollar gamble.” 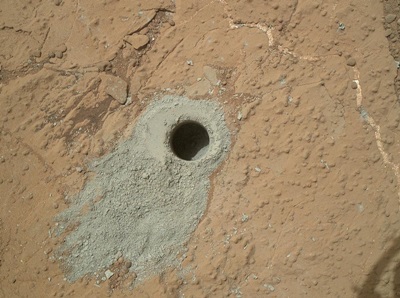 The rounded rocks seen so far are reminiscent of pebbles found on Earth, perhaps rounded by flowing water over a long period in a river bed. “This is a very special place,” Wiens said. “It was exactly what we were looking for.”

He recalls one team member saying, “Mars looks a lot like New Mexico, only more so.” Later he compared it to the terrain near Moab, Utah.

The mission is designed for two Earth years, but thanks to its “engine” – powered by plutonium with a half-life of 88 years - it could continue for much longer, Wiens said. “It could last another day or a decade.”

The search for signs of life is no simpler on Mars than it would be on Earth to find such clues to conditions 3.5 billion years ago. “It wouldn’t be easy on Earth,” Wiens pointed out. “The search will go on.”