3D Systems, the South Carolina company acknowledged as one of the leading companies on the emerging 3D printing scene, is adding more expertise in the area of laser sintering following another acquisition.

It has bought the UK firm CRDM, Ltd., a provider of rapid prototyping and rapid tooling services. Founded in 1995, CRDM uses a wide range of advanced manufacturing technologies – including selective and direct metal laser sintering.

The deal, for an undisclosed fee, follows 3D Systems’ recent $15 million acquisition of the French company Phenix Systems, which has developed 3D printers based on the laser sintering approach.

3D Systems said that it intends to immediately integrate CRDM into its global custom parts and manufacturing services offering, known as “Quickparts Solutions”.

CRDM designs, prototypes and manufactures parts and tooling for a variety of applications ranging across the automotive, aerospace, and medical device sectors.

One high-profile example of that work is in motorsports, including Formula 1, and the company also supplies to luxury brands Aston Martin and McLaren Automotive.

Recent experience in the aerospace sector includes a partnership Rolls-Royce under which CRDM made a scale working model of the engineering giant’s new electric distributed propulsion engine for the Paris Air Show. 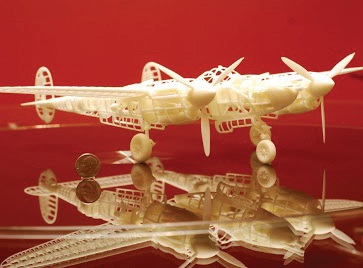 “CRDM is a strategic and geographically important addition to our rapidly growing 3D content-to-print services portfolio. With a proven track record in advanced manufacturing and rapid tooling, CRDM complements and expands our extensive range of custom parts services.”

One of the fastest-growing technology firms in the US, 3D Systems offers 3D printing technologies for personal, professional and production-quality applications.

In its latest financial quarter, the company posted revenues of $120.8 million – up 45% year-on-year and indicative of the rapid growth of the 3D printing space. Sales of printers and other hardware more than doubled over the same period, reaching $54.2 million.

At the recent 2nd Annual Needham Advanced Industrial Technologies Conference, aimed at the investor community, the Coherent CEO John Ambroseo said in a presentation that 3D printing had the potential to be an enormous and disruptive business, highlighting examples of applications in the automotive sector.

With the industry at such an early stage of development, Ambroseo said it was too early to tell how it would play out, but he expects lasers to play a role in some – though not all – 3D printing applications.

Recent examples of 3D printing applications that have used lasers include intricate jewelry designs, a steering knuckle used in a racing car, and - perhaps most intriguing of all - NASA's testing of a laser-printed injector for a rocket engine.