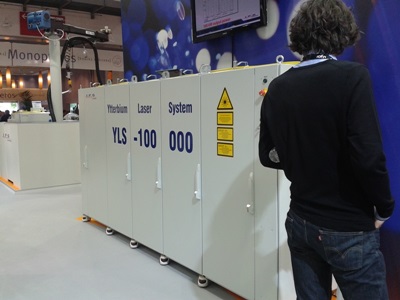 A former consultant for IPG Photonics has launched a lawsuit against the company, claiming to be the “true inventor” of methods used to improve high-power fiber switches and couplers.

The claim by Armen Dallakian, who worked as a consultant for IPG between 2006 and 2008, was filed on August 5 at the US District Court for the District of Massachusetts.

It centers around US patent 8,014,641, filed by IPG in late 2008 and entitled “Beam coupler”. Dallakian maintains that he should have been credited with the fiber coupling invention from which he claims the ‘641 patent is derived, and that IPG has been using the technology ever since.

The text of the complaint reads: “From 2008 to the present [IPG] sold thousands of couplers and hundreds of switches based on [the] fiber coupling invention and has failed provide any royalty to [Dallakian] as the lawful owner of it. Accordingly, [Dallakian] has been damaged in an amount to be proven at trial.”

IPG acknowledged the lawsuit in its latest Form 10-Q filing with the US Securities & Exchange Commission (SEC). In it, IPG states:

“The plaintiff alleges in his complaint that we misappropriated certain trade secrets from him relating to beam couplers and beam switches in connection with a consulting relationship, that we engaged in unfair trade practices and that he should be identified as an inventor on a patent owned by us.”

“He seeks damages in an unspecified amount, double damages for misappropriation of trade secrets, treble damages for unfair trade practices and correction of inventorship on one patent.”

“We have not answered the complaint. Although we intend to vigorously contest the claims against us, we cannot predict the outcome of the proceeding.”

It added: “At this time, no loss is deemed probable and no amounts have been accrued in respect of this contingency.”

Mirror mount
Dallakian’s complaint revolves around what the court documents describe as a simple tilt platform, in the form of a mirror mount, which can be adapted for use as a very high-resolution X,Y positioner in a fiber coupler or switch.

Before 2007, he alleges, IPG had been purchasing beam couplers and switches from the Swedish supplier Optoskand. According to Dallakian, these were very expensive (a cost of $27,000 for a fiber-optic switch is quoted), and IPG wished instead to design and build its own versions internally.

He alleges that IPG was having difficulty producing a less bulky and costly high-power fiber coupler, and that the company wanted to transfer intellectual property owned by Dallakian.

Despite not agreeing to that, Dallakian says that he did provide IPG with assistance, and built several prototype couplers for field tests before severing the consulting arrangement in late February 2008 “due to health reasons and working conditions” and offering to license the technology instead.

As well a request for a jury trial, Dallakian’s demands include a declaration that he is the inventor of the ‘641 patent, an injunction to stop IPG using the fiber coupler without his “express authorization”, and an award of damages.

Since 2008, IPG has become the dominant force for high-power fiber lasers used in materials processing applications. As the leader in one of the fastest-growing markets in photonics, IPG's annual sales have leapt from less than $200 million in 2007 to nearly $600 million in 2012.

In June, Forbes magazine listed the company fifth among the fastest-growing technology companies in the US, behind only LinkedIn, Facebook, Apple and the 3D printing specialist 3D Systems.