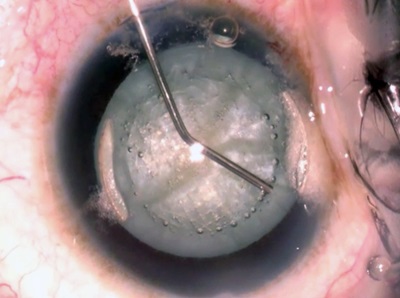 Abbott has completed its $400 million acquisition of OptiMedica, one of a number of venture-backed companies to have developed a cataract surgery system based around the high-precision ablation possible with femtosecond laser technology.

First announced in July, the deal is valued at $250 million, net of cash, initially, with the potential for additional payments of up to $150 million.

Abbott says that the acquisition expands its vision care business to an application area where ultrafast laser-assisted procedures are just beginning to make inroads.

The laser can be used to create an anterior capsulotomy, effect phacofragmentation, and make a variety of incisions during cataract surgery, and the Catalys system has both a CE Mark for use in Europe, as well as clearance from the US Food and Drug Administration (FDA). It is also currently the subject of a major clinical trial in France.

Abbott is already a major player in the sector, selling the monofocal, multifocal and toric intraocular lenses that replace a patient’s natural lens following its removal in conventional cataract surgery.

They invested in the company shortly after it was founded in 2004, although OptiMedica’s initial focus was not in the area of cataract surgery. The company licensed a pattern-scanning laser technology from Stanford University dubbed “PASCAL” (PAttern SCAn Laser), designed for retinal photocoagulation.

Less than four years after the launch of the first PASCAL photocoagulator, OptiMedica had shipped more than 600 PASCAL units around the world, with the systems used to treat more than 750,000 patients.

In August 2010, that success saw ophthalmology company Topcon, which added PASCAL technology to its product portfolio in 2008, acquire OptiMedica’s retina and glaucoma technology – a deal that also gave OptiMedica the funding needed to develop its femtosecond laser system for cataract surgery.