Galvanometer mirror system developed in collaboration with US Air Force. 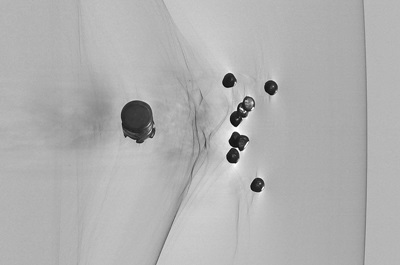 Researchers at the small Californian company Metrolaser have developed a digital streak camera capable of capturing full-color images of ballistic projectiles traveling at ten times the speed of sound.

The system, designed to replace the outdated film-based streak cameras that are still in use at high-speed test tracks, suits applications in ballistics and rocket sled imaging, and could even be used to determine the finishing order in high-speed races.

A traditional streak camera uses photographic film to record the motion of an object as it passes in front of the lens, while the film moves behind a vertical slit aperture during the exposure. The result is a long, continuous, composite image of the object.

But with the obsolescence of photographic film, the US Air Force asked Benjamin Buckner and Drew L'Esperance from Metrolaser to design a first-of-a-kind digital system that could produce high-quality images at the ultra-high speeds needed.

Developed under a Small Business Innovation Research (SBIR) contract, the new digital camera relies on precise control of a mirror that follows a fast-moving object, “freezing” its image onto the detector.

Described in the latest issue of the SPIE journal Optical Engineering, the system’s galvanometer mirror is synchronized to the motion of a ballistic object. According to Buckner, the biggest challenge is to accurately measure the object's speed, and calculate the swing of the mirror to match that speed precisely. "This has to be done in a few thousandths of a second," he says.

Need for speed
The digital streak camera was built to meet specifications established by operators of rocket sleds, which means that the camera is able to resolve an object 1.27 mm in size when a sled, which can also trigger the galvo mirror system, is traveling at 3350 m/s. It must be able to operate outdoors, and in conditions of heat, cold, dust, and moisture.

"The real power of this approach is that you can take almost any kind of existing camera back and fit it into a rig like this to turn it into a high-speed streak camera," Buckner says.

The main advantage of the galvo approach, compared with the more conventional use of rotating mirrors, is that it reduces image blur in very high-resolution images - especially important when streak cameras are used in experiments that are expensive and difficult to repeat.

In their paper, the researchers add that, as with most optomechanical streak approaches, their technique could also be extended to non-visible wavelengths by using appropriate sensors. “The increased length of exposure with synchroballistic imaging could be particularly useful with typically light-starved thermal infrared applications,” they write.

In addition to that, the speed of the system could be further boosted by incorporating more advanced digital sensors such as electron-multiplied or large-pixel CCDs.

The camera development began after an SBIR award of $404,000 back in 2008, since when Metrolaser has won several other contracts.

Those include a US Navy project to develop a planar Doppler velocimetry system for aircraft engine exhausts, and a US Department of Energy award for a fiber-optic borescope sensor to inspect components used inside nuclear reactors.