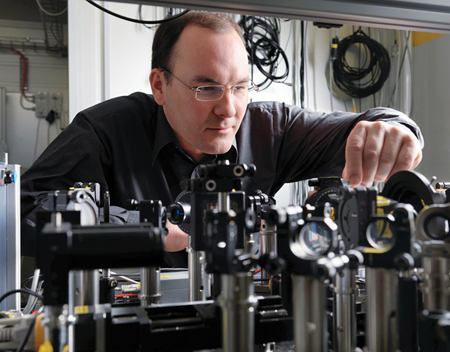 Christoph Hauri in the laser lab at the Paul Scherrer Institute.

The researchers led by Prof. Christoph Hauri, head of the laser group and professor at the Swiss Federal Institute of Technology in Lausanne (EPFL), have reported on their results in the journal Nature Photonics.

The collaborative group from PSI and EPFL have now studied a new approach in conjunction with French colleagues at the Université Pierre et Marie Curie in Paris to explore the possibilities of picosecond magnetisation. The terahertz laser development was made possible thanks to a successful collaboration with Swiss industrial partner Rainbow Photonics AG.

The terahertz laser used in the experiment at PSI is one of the most powerful of its type in the world. But unlike the light from conventional lasers, terahertz light does not heat up the magnetic sample, which turns out to be an essential feature for achieving precise manipulation of the magnetisation. Furthermore, the laser is phase-stable, which enables the exact change in the electrical and magnetic field within the individual pulses to be defined reliably for each laser pulse. 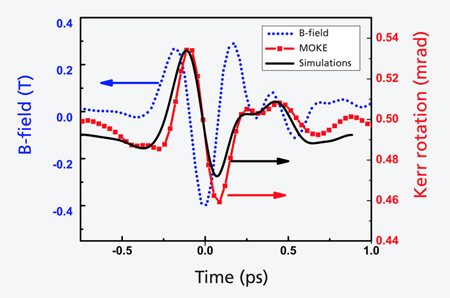 A pulse from a terahertz laser (blue) controls the magnetisation of a material (red).

The terahertz flashes are so short that the magnetic field only has time to orient in one direction, then in the opposite sense. In the illuminated material, the magnetic moments are deflected similarly: first one way, then the other – but with a tiny delay, creating the memory potential.

“We use special organic crystals for our lasers that reduce the frequency of laser light”, says Hauri. “If we shine onto the crystal using a strong laser with a high frequency, it emits radiation on a terahertz scale.”

”The laser flash in the experiments so far has not yet been intensive enough to flip over the magnetisation completely; we can merely observe the dynamics of the magnetisation. But the experiment is an extremely important milestone for demonstrating the concept of the ultrafast and exact manipulation of magnetism by laser.”

Hauri says he is confident that a complete flip-over of the magnetism can be achieved. “There are tricks to enhance the fields of a weak laser to such an extent that they could switch the magnetisation.”

This would also involve selecting a special pulse form and generating a pulse where the magnetic field initially points in one direction weakly, then strongly in the other, then point back in the original direction weakly again. If only the middle strong part of the pulse is strong enough to flip over the magnetisation, one could use such pulses to re-magnetise materials. Such precisely defined pulses are now available at the PSI.

At the Paul Scherrer Institute, the development of the terahertz laser is part of the SwissFEL project, where the SwissFEL X-ray laser is being constructed as the PSI’s new large-scale facility. It will produce laser light on an X-ray scale and thus make many processes visible in the material that are not accessible using today’s study methods.

Terahertz lasers are due to be used in two places there. On the one hand, they will be employed for measuring the properties of the X-ray beam in operation. On the other hand, they could be used to initiate reactions in experiments where the intermediate state is to be determined later with the X-ray laser.