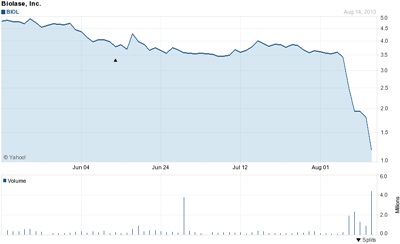 Biolase, the California-based company best known for its dental lasers, has re-filed its recent “S-3” registration statement with the US Securities & Exchange Commission (SEC), slashing the proposed round of fundraising from a maximum $30 million to only $5 million.

The move came as CEO Federico Pignatelli slammed what he described as “wild speculation” about the company’s financial position. Since the original S-3 statement was filed in late July, the Biolase stock has lost nearly 70% of its value.

“Speculative forces have manipulated the market to believe that we are in a liquidity crunch and that we must raise a large amount of money to continue our operations,” Pignatelli said in a statement issued by the firm. He added: “This is absolutely false.”

Quarterly loss
Last week, Biolase announced its latest quarterly results, and although sales of $14.2 million represented a 17% year-on-year increase, the result was significantly lower than Pignatelli had targeted.

The company’s operating loss also widened to $2.3 million, with the CEO pinning the blame on a variety of factors ranging from flooding in Canada to delayed deliveries and “a sharp rise in interest rates”.

That left the company with only $2.1 million listed in cash and equivalents on its balance sheet as of June 30, with recently appointed president and COO Alex Arrow telling an investor conference call on August 7 that the company no longer expected to generate cash from operations overall during the current year.

Then on August 13, Biolase issued another statement to the effect that its creditor Comerica Bank had agreed to waive the company’s “non-compliance” with a condition in the agreement between the two parties that was signed in May 2012.

That condition related to Biolase’s profitability, and Comerica agreed to waive it on the basis that Biolase would not borrow more than $7.5 million under the loan agreement. The June 30 balance sheet showed a $6 million credit liability, up from only $1.6 million at the end of 2012.

Pignatelli, who has overseen a turbulent few years at Biolase, pointed out that Biolase was about to enter its “high season”, during which it tends to generate a large proportion of its annual sales.

“Therefore, the rumors that Biolase must raise a high level of capital in the near term are totally uncalled for,” argued the CEO, also a major shareholder. “In addition, we expect our DaVinci Imaging Division, which sells NewTom digital imaging products and 3Shape CAD/CAM intraoral scanners, to transition from a negative contribution loss to a positive contribution profit for the remainder of the year.”

Following the strongly worded statement and the amended S-3 filing, the Biolase stock price rose around 10% in pre-market trading – though at only $1.33, it remained stuck at lows not seen since the boardroom split in 2010 that ultimately saw Pignatelli return as CEO.