But the US firm is likely to face a battle with IPG Photonics over key customer Amada. 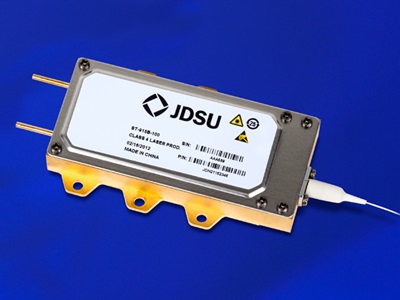 Diversified photonics company JDSU saw revenues decrease slightly year-on-year in the closing quarter of its fiscal year 2013 – but was able to post a net profit thanks to a tax benefit worth $113 million.

For the three months that ended June 30, the California-headquartered firm reported an operating loss of $18.6 million as total sales declined to $421.3 million, down 3% compared with the final quarter of fiscal 2012.

That total included $154.1 million from sales of optical communications products, $28.2 million from lasers and $49.2 million attributed to its “optical security and performance products” segment – all down on last year.

The total for lasers included $4.3 million for fiber sources, up from $3.8 million sequentially. CEO Tom Waechter said of that part of the business:

“We expect a more sizable ramp when our next-generation fiber laser with advanced features and market-leading cutting speeds begins shipping.”

However, it appears that JDSU will have a fight on its hands when it comes to key fiber laser customer Amada, the Japanese machine tool specialist.

Special relationship
JDSU has been working with Amada for several years to help develop products based on its multi-kilowatt fiber laser sources, but in a presentation at the Needham 2nd Annual Advanced Industrial Technologies Conference held in New York City on August 13, IPG’s CFO Tim Mammen told analysts:

“There’s a large Japanese [OEM] that’s using a laser supplied by one of our competitors. That laser is not performing well at all, and we believe that within the next twelve months or so, that customer will have to start sourcing from IPG.”

Mammen did not specify the companies involved, but when asked about those comments and JDSU’s relationship with Amada by an equity analyst during the JDSU investor call, Waechter replied:

“I think from the top level in Amada, down to the engineering level, we have very good relationships. It's a partnership that's been going for more than four years now.”

“As we progress with our roadmap on fiber lasers, the focus is really to drive beam quality, laser diode cost and overall system cost, and we think that we've addressed each of those variables with our next-generation laser that is under development and being tested.”

“We're pretty excited about that, and so is Amada. So we're going to continue to support them and they're supporting us. The partnership is very unique and special, and very key to JDSU and Amada.”

Outside of industrial lasers, JDSU is also benefiting from the more widespread emergence of gesture recognition technologies in computing, beyond the Microsoft Kinect console.

“While we are not disclosing revenue at the request of our primary customer, gesture recognition was a significant contributor to our top line during fiscal Q4,” Waechter said.

“Most of the revenue came from laser diodes used in a new gaming platform for an existing customer,” he added. “Market demand for optical filters is also growing. LeapMotion, our second gesture recognition customer, started shipping their personal computing device in late July, which includes specialized optical filters designed and produced by [our] optical security and performance products (OSP) division.”

But with JDSU deciding to withdraw from a number of optical thin-film coatings applications – including product lines for the office automation, custom display and solar markets – that part of JDSU’s business is set to be heavily cut, with a workforce reduction of some 28% anticipated by the end of the calendar year.

“This will also enable the OSP leadership team to better focus its efforts on pursuing growth opportunities for the business,” said the CEO.