CEO hails a strong finish to the US company’s latest financial year. 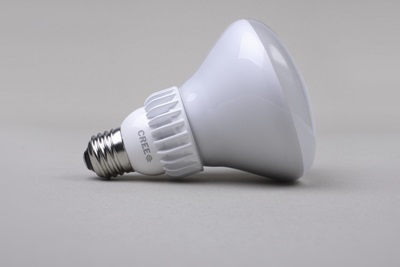 LED chip, component and lighting firm Cree has reported another strong increase in annual sales, with revenues rising 19% year-on-year to $1.39 billion in the 12 months ended June 30.

Boosted by demand for its LED bulbs sold through the Home Depot retail chain in the latest quarterly period, the Durham, North Carolina, company also posted a net profit of $86.9 million for the year – nearly double the $44.4 million figure reported for fiscal 2012.

CEO Chuck Swoboda described the recent period as “a strong finish to a great year”, and added:

“After only five years, we created one of the largest lighting businesses in the US. We are in a great position to take advantage of the global shift to LED lighting through both our lighting and LED products.”

Despite the record figures and Swoboda’s comments, Cree’s stock fell sharply in after-hours trading after the company forecast that revenues in the current quarter would be only slightly up on a sequential basis.

New lamps for old
The long-time CEO highlighted several recent product introductions as Cree continues its bid to convert all lighting to LEDs. They include the new “XSPR” street light, which at a cost of only $99 is designed to compete head-to-head with the familiar high-pressure sodium lamps in residential applications. Cree says that the XSPR offers 65% energy savings and a “significant upgrade” in light quality.

The latest product launched in conjunction with Home Depot, the BR30 LED flood light (65W replacement), has been priced competitively – in Cree’s words “to give consumers a reason to switch to LED” – while the UR Series linear upgrade kit is said to enable customers to convert their existing fluorescent fixtures to LED for less than $100, without removing the fixture.

“Our partnership with the Home Depot has demonstrated that great products at great prices, combined with a world-class retailer and a serious investment in marketing, can change both consumer behavior and the product category faster than many of the skeptics predicted,” Swoboda told an investor call.

“To put this in perspective,” continued the CEO. “We believe that we have sold more Cree LED bulbs at the Home Depot since our launch than they've sold of all other A19 LED bulbs combined. We plan to continue to make a significant investment in marketing the Cree LED bulb in fiscal 2014.”

Capacity expanding
With those bulbs in demand, Cree’s chip manufacturing facility is now operating at close to maximum capacity, and so the company is working to expand its production capability.

One part of the expansion strategy is to migrate more manufacturing onto 150 mm diameter wafers, which can host more than twice as many LED chips as the company’s existing 100 mm production line.

Swoboda said that slightly less than half of Cree’s chip production had now migrated to the larger format, suggesting that there is still significant headroom for the firm to meet additional demand.

Any more significant investments in capacity expansion that may be required in the longer term can be easily covered by the company's healthy cash balance. Having generated more than a quarter of a billion dollars in cash during fiscal year 2013, Cree now boasts a balance sheet featuring more than $1 billion in cash and equivalents - and no debt. 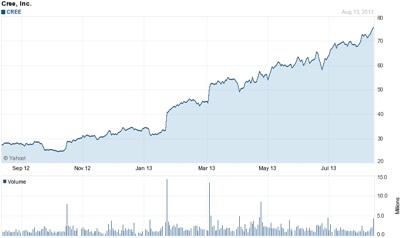 Over the past year, the firm’s stock price has risen steadily from just under $30, and closed at more than $75 ahead of the latest results announcement - equivalent to a market capitalization of $8.9 billion.