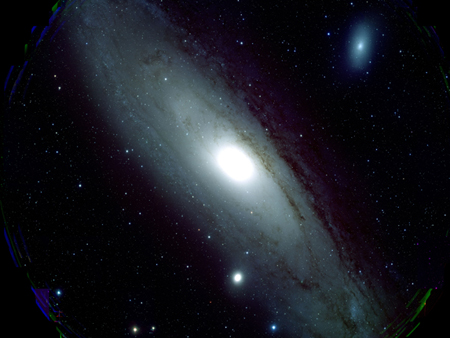 A newly-developed astronomical camera known as the Hyper Suprime Cam (HSC) will fulfill the Japanese Subaru Telescope's intention of producing a large-scale survey of the Universe. Its combination of large mirror (8.2 m), wide field of view (1.5 degrees), and sharp imaging represents “a giant step into a new era of observational astronomy” say the development consortium.

HSC's first released image is that of galaxy M31, also known as the Andromeda Galaxy, which is the spiral galaxy nearest to our own Milky Way Galaxy, 2.5m light years from Earth. It is one of the brightest objects listed in the Messier catalog and has garnered the attention of observers since 964 A.D., when the Persian astronomer al-Sufi wrote about it. Astronomers find it particularly interesting, because it is quite similar to the Milky Way Galaxy and is expected to provide valuable information about how our own galaxy formed.

The HSC Project, which began in 2008, is an international collaboration involving research partners, the National Astronomical Observatory of Japan, Kavli Institute for the Physics and Mathematics of the Universe, Japan, the School of Science at the University of Tokyo, KEK (High Energy Accelerator Research Organization, Japan), Academia Sinica Institute of Astronomy and Astrophysics, Taiwan, and Princeton University, USA. Companies involved include Hamamatsu Photonics, Canon and Mitsubishi Electric.

The cooperation of so many institutions and organizations resulted in the completion and installation of the major components of HSC (116 charge-coupled devices, the seven, high-optical quality lenses of the wide field corrector in an innovative ceramic lens barrel, and the prime focus unit) onto the Subaru Telescope in August, 2012.

The recently installed filter exchange unit (FEU) is another example of the fruit of international collaboration. ASIAA (Taiwan) received valuable input from NAOJ about the overall concept of the unit, its requirements, and definition of the interface with the camera. ASIAA and its domestic partner, the Aeronautical Systems Research Division of Taiwan's Chung-Shan Institute of Science and Technology (ASRD), developed the unit in Taiwan.

The completed FEU was ready to use on HSC for the observation of M31. The unit can store up to six filters and position one of them in the optical path. During the exchange process, a motorized cart grasps the required filter and pushes it from the jukebox storing its filters. FEU's operation is fully automated, and it can complete the entire exchange sequence in 14 minutes.

Dr. Satoshi Miyazaki, director of the HSC Project, said, "The sharp resolution in the current image augurs the instrument's capabilities for capturing weak lensing, which is central our scientific goals of surveying the parameters and properties of dark matter and dark energy in the Universe as well as exploring the causes of the accelerating expansion of the Universe. The design of HSC facilitates this task with a faster survey speed and tenfold expansion of file size, while maintaining quality equivalent to the Suprime Cam's."

Dr. Masahiro Takada (Kavli IPMU), chair of the HSC science working group, said, "We can now start the largest-ever galaxy survey for understanding the evolutionary history and fate of the expanding Universe. A large-scale imaging survey of every galaxy over a wide solid angle in the sky will include the detailed measurement of multiple galaxy shapes and an assessment of the effects of gravitational lensing. Such data will allow scientists to map the distribution of dark matter, constrain the nature of dark energy, and search for baby galaxies that were just born in the early Universe."