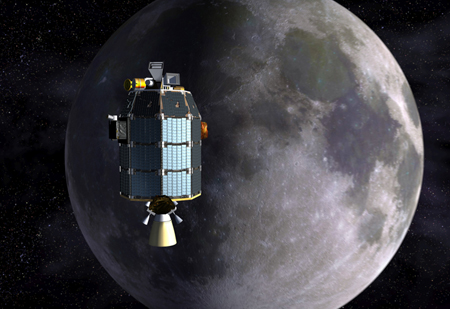 An advanced infrared laser system offering significantly faster data speeds through space is now ready for linking with remote spacecraft following a series of crucial ground tests. Later this year, ESA’s observatory in Spain will use the laser to communicate with a NASA Moon orbiter.

Zoran Sodnik, manager for ESA’s Lunar Optical Communication Link project “The testing went as planned, and while we identified a number of issues, we’ll be ready for the launch of NASA’s Lunar Atmosphere and Dust Environment Explorer, LADEE’s mid-September launch.

“This paves the way for a live space demonstration in October, once LADEE begins orbiting the Moon. The first laser link-up with LADEE is expected to be attempted four weeks after launch, around mid-October.”

LADEE carries a terminal that can transmit and receive pulses of laser light. ESA’s Optical Ground Station on Tenerife will be upgraded with a complementary unit and, together with two US ground terminals, will relay data “at unprecedented rates” using infrared beams at a wavelength similar to that used in fiber-optic cables on Earth.

Sodnik added, “Our ground station will join two NASA stations communicating with the LADEE Moon mission, and we aim to demonstrate the readiness of optical communication for future missions to Mars or anywhere else in the Solar System.” 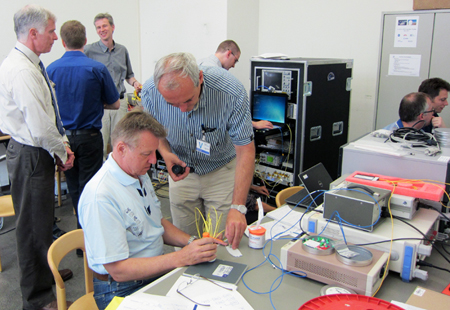 A NASA team, supported by the Massachusetts Institute of Technology's Lincoln Laboratory and the Jet Propulsion Laboratory, brought their laser terminal simulator from the USA, while ESA together with RUAG and Axcon, Lyngby, Denmark, set up the European equipment to test compatibility between the two sets of hardware.

“This interagency optical compatibility test was the first of its kind, and it established the uplink, downlink and the ranging measurement,” said ESA’s Klaus-Jürgen Schulz, responsible for ground station systems at the European Space Operations Centre, Darmstadt.

“Laser communications at near-infrared wavelengths may be the way of the future when it comes to downloading massive amounts of data from spacecraft orbiting Earth, Mars or even more distant planets. These units are lighter, smaller and need less power than today’s radio systems, promising to cut mission costs and provide opportunities for new science payloads.” 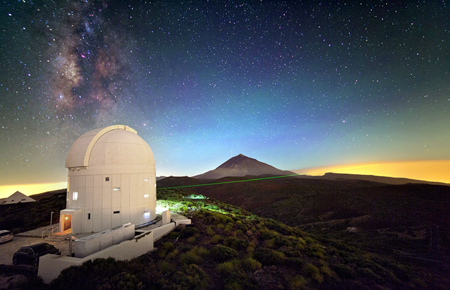 ESA's Optical Ground Station (OGS) is 2400 m above sea level on the volcanic island of Tenerife. Visible green laser beams are used for stabilising the sending and receiving telescopes on the two islands. The invisible infrared single photons used for quantum teleportation are sent from the neighbouring island La Palma and received by the 1 m Telescope located under the dome of the OGS.

Initial experiments with entangled photons were performed in 2007, but teleportation of quantum states could only be achieved in 2012 by improving the performance of the set-up.  Aside from inter-island experiments for quantum communication and teleportation, the OGS is also used for standard laser communication with satellites, for observations of space debris or for finding new asteroids. The picture is a multiple exposure also including Tenerife's Teide volcano and the Milky Way in the background.