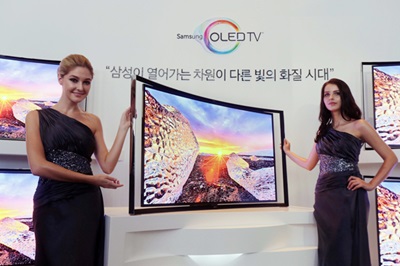 Sales of OLED materials rose particularly sharply as total revenues came in at $49.4 million, a 65% increase on the equivalent period in 2012.

And although costs were also up, the company was able to post a net income of $15.4 million, compared with $11.0 million a year ago.

In an investor conference call to discuss the results, UDC’s CEO Steve Abramson said that he believed the result represented a “pivotal quarter”, as leading displays companies look to scale their production and introduce new OLED-based products.

“With the introduction of the first commercial mobile product utilizing both our red and green materials in the second quarter of 2013, we have seen our green emitter sales almost triple quarter-over-quarter,” Abramson noted.

“We now have both red and green emitters as well as green host in commercial volume production.”

The CEO added that, as well as looking to augment its materials portfolio, UDC was now also pursuing new avenues of growth through projects including single-layer barrier encapsulation and organic vapor jet printing (OVJP).

Major players on board
That comes as key customer Samsung – which is growing its organic electronic materials expertise further with the planned acquisition of Novaled - is aiming to scale production of its new OLED-based televisions.

Samsung is expected to pay UDC a license fee of $40 million during 2013, and with the positive sales growth evident in the latest financial quarter, CFO Sidney Rosenblatt said that UDC wold likely hit the high end of its revenue guidance for the full year, around $125 million.

Despite the likes of Samsung, LG and Sony all introducing OLED-based TVs recently, they are currently made in only pilot-production quantities, meaning that the growth in the OLED market remains tied closely to smartphone adoption. That could change now, however, after Samsung said that it would cut the price of its curved OLED screens (pictured above) in a bid to popularize the technology.

Rosenblatt added: “Beyond the foreseeable opportunities in smartphones and televisions, we believe the energy efficiency and superior performance of OLEDs can open vast new markets.” 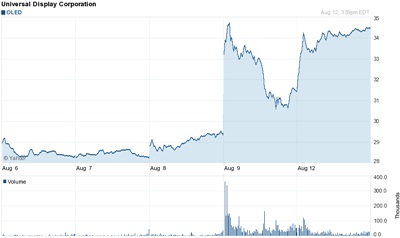 UDC stock: on the up

• UDC’s stock price rose sharply following the latest results announcement, which coincided with news of the deal by Samsung to acquire another OLED specialist, Germany’s Novaled.

At closing on August 12, the stock price of $34.50 was equivalent to a market capitalization of nearly $1.6 billion – with a remarkable price-to-earnings ratio of 150 demonstrating the stellar future growth expectations held by investors.