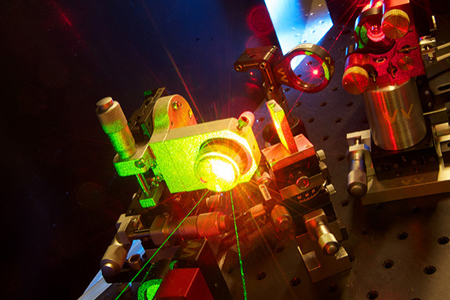 Strathclyde is harnessing the special properties of diamonds.

A team at Strathclyde University, Glasgow, Scotland, has developed a new type of high-performance, ultra-versatile Raman laser that harnesses diamonds to produce light beams with more power and a wider range of colors than current Raman lasers.

Professor Martin Dawson, who initiated and oversaw the project at Strathclyde’s Institute of Photonics, commented, “Our new lasers can generate light ranging from the lower end of the ultra-violet part of the electromagnetic spectrum, right through the visible part, up to the middle of the infra-red region. That means they can plug many of the existing gaps in conventional lasers’ capabilities.”

The researchers add that the novel laser's capabilities could open up important new applications, such as better treatment of skin complaints and diabetes-related eye conditions, to improved pollution monitoring and aeronautical engineering. The research is being funded by the UK's Engineering and Physical Sciences Research Council (EPSRC).

1. The first “tunable” diamond Raman lasers, in which the color of the light can be adjusted to meet specific needs. For example, the treatment of vascular lesions (in the eye) – an abnormal cluster of blood vessels – requires a yellow/orange light that is difficult to produce with conventional lasers but which is needed to maximise absorption by the lesion while minimising damage to surrounding tissue.

Underpinning this breakthrough is the fact that diamond’s optical properties enable diamond lasers to produce a range of colors that are hard to generate by conventional means. For example, yellow/orange light which can be used in medicine in the treatment of conditions such as vascular lesions, or retinal bleeding of blood vessels at the back of the eyes.

2. The first ever continuously-operating diamond Raman laser. This is important because lasers that can only provide short pulses of light are unsuited to some medical and other applications – for example, where pulses would damage delicate structures in the eye. In medical treatment for highly sensitive areas, therefore, there are situations where using a pulsed laser would create too much acoustic disturbance.

The silicon and other materials conventionally used in Raman lasers to change the colour of light are limited by the power of the laser and the range of colours they can produce, due to the materials’ physical properties. For instance, their relatively limited ability to conduct heat restricts the amount of laser output that can be generated, while their particular optical properties limit their ability to generate certain useful colours of light. 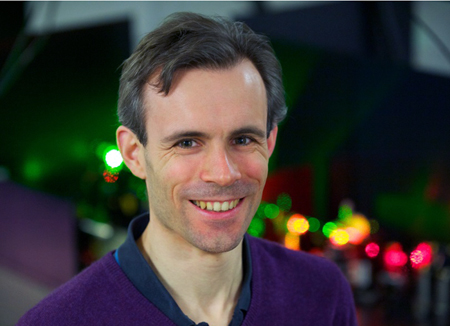 By contrast, diamond has unrivalled thermal conductivity which, combined with its unique strength, rigidity and optical properties, make it ideal for use in lasers. Strathclyde’s Dr Alan Kemp, principal investigator on the project, said: “Exploiting single-crystal diamonds directly in lasers opens up a world of possibilities. A key benefit is that you don’t need a big crystal to generate the power you require, so you can make lasers much smaller.

“Conventional Raman lasers have to incorporate a crystal three to six centimetres long. But our new lasers can produce the same amount of power with a diamond crystal just two to six millimetres long. That means lasers could be deployed in confined spaces where they currently simply can’t go – such as in aeronautical applications and medicine where high-power lasers of particular colours are required but space is at a premium.”

Dr Jennifer Hastie led the project to demonstrate the first tunable diamond Raman lasers, achieved by incorporating the Raman crystals into semiconductor disk lasers – a novel type of tunable laser extensively developed at Strathclyde’s Institute of Photonics. She commented, “Raman lasers work by firing a pump light beam through a crystal, thus creating heat, and as that heat is generated the laser beam is converted to a different colour. If the initial color of the pump light is tunable – for example, that provided by a semiconductor disk laser – we can achieve tuning of the Raman laser color.”

Project leader Dawson added, “We’ve shown that diamond Raman lasers have the potential to emerge as an important and distinctive technology. The development of innovative laser technology is an incredibly competitive field and EPSRC support has enabled us to achieve genuinely world-leading advances that have enormous potential. We’re now aiming to build on our successes to date, with a view to helping a whole new generation of lasers become available for deployment, perhaps within five to 10 years.”

An audio slide show, which includes images of the diamond lasers, can be found on the EPSRC YouTube channel, here: