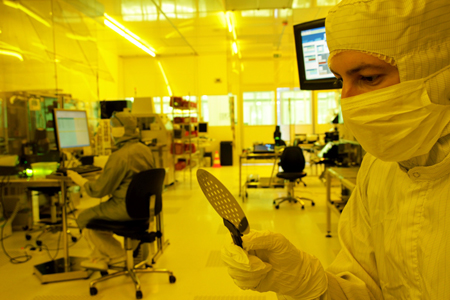 ICT researcher Matthieu Lacolle, who has worked with acoustics scientists at SINTEF to develop this innovative microphone, comments, "Think of traditional videoconference equipment. Several people are sitting around the table, but the microphone has been placed where its sound reception is less than optimal.

"With technology of the sort we have developed, the microphone can locate where the sound comes from, pick up the voice of the person speaking, and filter out background noise in the room."

Besides its microelectronics, the microphone features an optical position sensor that measures less than 1mm in diameter. Lacolle adds, "The reason for giving a position sensor such an important role is that the microphone is completely dependent on a flexible membrane, which picks up the pressure waves produced by the sound. We do this by measuring light waves from a small laser, so one can say that the sensor in this microphones sees the sound."

The technology that makes the microphone so sensitive is based on a combination of two optical phenomena. "We exploit optical diffraction and interference to measure membrane movements of less than the diameter of an atom by using the optimal sensor. We have created grooved microstructures on the membrane’s reference surface, which lies directly underneath the microphone membrane. When the laser illuminates these microstructures, we can read off the direction in which the light is reflected by means of photodetectors."

All of the components are integrated into a tiny circuit that is mass-produced on a silicon wafer on which all the structures are etched, using special equipment within a clean room.

A VCSEL illuminates a grating situated just under the membrane and one or several photodetectors measure light intensities in one or several diffraction orders of the grating, which is actually a diffractive lens with focusing capabilities. 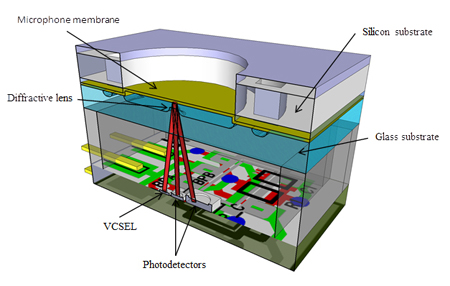 Cross-section of the SINTEF microphone including the readout electronics.

Norwegian company Norsonic supplies various types of noise-measurement equipment, and intends to use the SINTEF microphone to measure both sound pressure and acoustic power.

Senior scientist Ole Herman Bjor commented, “What is unique about this technology is that it is an extremely sensitive microphone that is capable of registering sound waves far beyond the range that typical microphones in this price range can achieve today.

"This lets us compete in a market that is currently led by very expensive equipment. Our version is also much smaller, which is an advantage in itself, because the physical size of the microphone actually affects the sound field that it is measuring.” 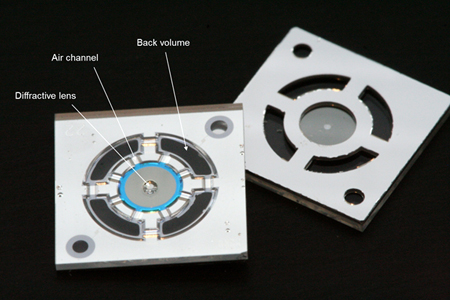 Seen and heard: Front and backside of an optical microphone.

"The main advantage of optical readout is the sensitivity: a traditional condenser MEMS microphone has a noise floor typically in the 30-35 dBA range, we expect the optical microphone to have a noise floor in the 10-15 dBA range.

"There exist today high-end microphones with such sensitivity, but they are usually bulky and expensive. In essence, everyone who needs a better microphone than a condenser MEMS microphone would benefit from an optical microphone."