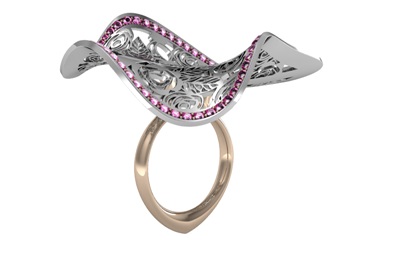 Design students at the School of Jewellery in Birmingham, UK, are using laser additive manufacturing to produce complex new pieces much in rapid fashion.

According to ES Technology, UK distributor of the “Laser Cusing” tools developed by Germany’s Concept Laser, the flexibility of the additive process has given designers both a new freedom of expression and the ability to produce multiple pieces in the shortest possible time.

Students Georgia Ayley and Layla McCook are among a number who have used the novel process to create intricate and highly detailed designs. And because they are created layer-by-layer, their pieces feature none of the usual “joins” that are traditionally required.

Designed with the high-end luxury market in mind, the student is also hoping to work on pieces in 18ct white, rose and yellow gold in the future. 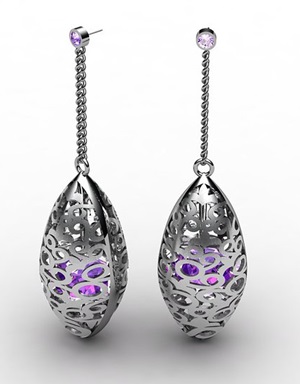 Intricate eggs
Georgia Ayley uses precious metals in combination with uncut and cut gemstones, and the same additive process to create designs inspired by the intricacies of ivory Chinese eggs.

She was able to trap an amethyst stone inside a pendant and earring capsules from this collection, creating pieces that are both seamless and feature a smooth finish. The traditional method of producing such pieces would have required laser welding, resulting in a visible joint line.

“This technology inspires more creativity with shapes and forms and has allowed me to remain faithful to my original concepts and vision,” says the student, whose other designs with additive manufacturing included a cuff bangle, set with pink sapphires, citrines and a large uncut pearl.

Both students used ES Technology’s Mlab cusing demonstration machine in Daventry to create their designs, with Colin Cater from the firm advising. ES says that the “LaserCUSING” process is ideally suited to the application – with rapid transition from design to production.

Concept Laser says that the key aspect of its process is the so-called “stochastic exposure” strategy. This works on what the company describes as an island principle, meaning that segments of each individual layer are built up sequentially.

“The patented process ensures a significant reduction in stresses within the component, which allows solid and large-volume components to be generated with low warping,” it states.

“The LaserCUSING layer construction process allows the fabrication of both mould inserts with close-contour cooling and direct components for the jewelry, medical, dental, automotive and aerospace sectors,” the firm adds. “This applies to both prototypes and batch parts.”