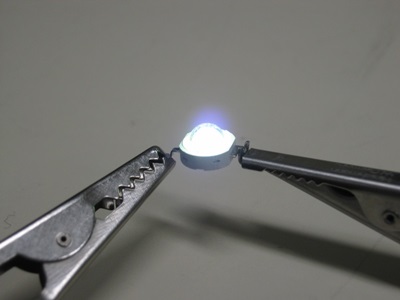 Despite the transition of LED-based solid-state lighting (SSL) to an $80 billion industry over the next few years, the silicon substrate technology touted by some as the key to bringing down chip costs is set to remain a niche play.

That’s according to a new report from the market research company Lux Research. Its analysts predict that while the market for LED epiwafers – the base technology for the light-emitting chips – will grow to a value of $4 billion by 2020, only 10% of that market will be taken by gallium nitride (GaN)-on-silicon.

Many of the largest LED chip manufacturing companies – the likes of Osram Opto Semiconductors, Samsung and Philips Lumileds – have experimented extensively with GaN-on-silicon technology, seeing it as a potentially much cheaper replacement for the conventional GaN-on-sapphire approach that dominates the sector today.

Silicon proponents such as US-based Bridgelux (whose wafer manufacturing operation is now owned by Toshiba), the UK’s Plessey Semiconductors and China’s Lattice Power have all based their approach around the use of silicon substrates, which opens up the possibility of exploiting production equipment in large semiconductor fabs to fabricate light emitters in huge volumes.

Technical challenges
Lux notes the attraction of silicon, estimating that for the equivalent wafer area, the material costs just one-eighth that of a sapphire substrate. But its analysts say that technical challenges – largely resulting from the physical mismatch between silicon and GaN crystal lattices - will limit the material combination to only a 10% share of the LED epiwafer market by 2020.

“Silicon is already widely used for electronics, and some LED die manufacturers are hoping to take advantage of silicon substrates,” said lead author Pallavi Madakasira. “But GaN-on-silicon is more prone to cracking than GaN-on-sapphire, and mitigating this mismatch is expensive.”

At the same time, Lux believes that the GaN-on-silicon carbide (SiC) approach, long championed by the US LED maker Cree, will grow to claim an 18% market share by the end of the decade.

And while the Californian start-up Soraa is basing its approach around native GaN substrates – thereby eliminating completely the mismatch problem – Madakasira is of the opinion that sapphire will remain dominant.

That is partly because she thinks that GaN-on-sapphire technology is suited to all applications, whereas the very high performance of GaN-on-GaN will only find niche use in commercial lighting. Where GaN-on-silicon technology will be better suited, Madakasira believes, will be in cost-sensitive residential applications.

Although residential lighting is a major market, LED makers say that commercial lighting represents an even larger opportunity, as well as one where profit margins are less likely to be squeezed than in the much more competitive residential sector.

Wafer size isn’t everything
In terms of wafer sizes, the Lux report predicts that the four-inch format will continue to be the dominant size, peaking in 2017 with a 62% market share worth $2.1 billion in sales.

While much of the recent technological innovation in LED manufacturing has focused on the use of GaN or silicon substrates, and the various additional layers of materials needed to help compensate for the lattice mismatch with GaN-on-silicon, sapphire advances have perhaps gone unnoticed.

Lux believes that sapphire substrate manufacturing technology has in fact advanced significantly, with specialists such as US-headquartered Rubicon and Russia’s Monocrystal demonstrating substrates up to a foot in diameter. However, while Rubicon’s 12-inch boule makes regular appearances at industry events, the LED industry will not be adopting the technology any time soon.

Instead, new deposition methods such as hydride vapor phase epitaxy (HVPE), a faster and cheaper approach compared with the more widespread metal-organic chemical vapor deposition (MOCVD), are tipped to further improve throughput and cut costs, keeping sapphire highly competitive for the rest of the decade.

• The Lux Research report, entitled “Dimming the Hype: GaN-on-Si Fails to Outshine Sapphire by 2020”, is available now via the company’s web site.