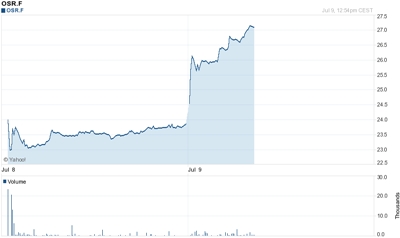 Up and running: Osram Licht's stock

Shares in Osram Licht AG, the new official name for the global lighting company spun out of the German engineering giant Siemens on July 8, surged nearly 20% in value in their second day of trading on the Frankfurt stock exchange.

The flotation, which was originally scheduled for late 2011 but delayed by the weak financial situation in Europe, saw Osram’s stock launched at €24 per share – equivalent to a market capitalization of around €2.5 billion.

After an initial slip in value to €23.00 that had been predicted because some institutional investors were compelled to sell their stakes in the firm immediately, Osram’s stock recovered steadily but still ended its first day of trading just below its flotation price.

But in early trading on July 9, the company’s stock price rose by more than 10%. By lunch time in Frankfurt it was changing hands for more than €27.00, and continued rising beyond €28.00 later in the day.

That is equivalent to a market value of around €2.9 billion, and significantly closer to the €3.2 billion valuation that Siemens believes Osram to be worth.

Rated as the world’s second-largest lighting company after Philips, Osram is part-way through a major reorganization designed to set it up for the unfolding transition from conventional to solid-state lighting (SSL) technology based on LEDs.

But according to the company, LED-based products already accounted for more than a quarter of its annual revenues, which amounted to €5.4 billion in its financial year ending September 2012 – with that proportion set to grow rapidly as SSL becomes more widely adopted.

New chapter
Osram is vertically integrated within the lighting supply chain, manufacturing huge volumes of LED chips at its key production facilities in Regensburg, Germany, and Penang in Malaysia.

Another large facility in Wuxi, near Shanghai in China, for back-end LED assembly is also under construction, although the difficult transition from older technologies is expected to see Osram cut its total number of manufacturing sites from 43 to 33.

As the company’s stock was admitted onto exchanges in both Munich and Frankfurt on July 8, the Osram CEO Wolfgang Dehen said:

“Today’s listing marks the beginning of a new chapter in the company’s more than 100-year history and presents great opportunities for the company’s future development.”

The spin-off of 80.5% of Osram saw existing Siemens shareholders receive shares in Osram Licht AG at a ratio of 10:1, and it is estimated that Osram had a shareholder base of more than 700,000 investors as it began trading.

Former parent company Siemens has retained a 17% share of the company, with the remaining 2.5% transferred into a Siemens pensions trust.