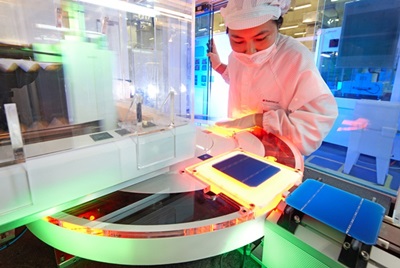 The European Union (EU) is to impose an initial tariff of 11.8% on imports of solar cells, wafers and panels from China, with the potential for much larger duties at a later stage if negotiations with exporters fail.

The decision, which follows last year’s move by the US Department of Commerce to impose similar anti-dumping duties, follows a nine-month investigation by European authorities. Both the US and EU punitive measures were instigated by a complaint from Germany-based SolarWorld.

In a statement on the decision, the European Commission (EC) said: “Highly innovative EU companies are currently being exposed to immediate threats of bankruptcy because of unfair competition from Chinese exporters, who have taken over more than 80% of the EU market and whose production capacity currently amounts to 150% of global consumption.”

“In 2012, China’s excess capacity was almost double total EU demand,” it added. “The Commission’s assessment indicates that imposing provisional measures will not only secure the existing 25,000 jobs in EU solar production, but also create new jobs in the sector.”

Jobs trade-off
But the EC admits that in the short term some jobs in Europe could be lost at solar installers, especially in locations where government subsidies have been falling along with the cost of the technology. That is particularly likely to hit installers in countries that are heavily dependent on Chinese imports – such as the UK.

Last week Paul Barwell, CEO of the UK’s Solar Trade Association, spoke out against the imposition of tariffs to protect European manufacturers, saying: “It makes no sense to safeguard 8000 manufacturing jobs by sacrificing up to 200,000 jobs in the wider industry.”

Following political pressure, the EC backed down on initial plans to impose average tariffs of 47.6% on Chinese imports. But the rate of 11.8% will only apply for two months – from August duties will rise to the EC’s original 47.6% figure, unless a deal with China can be brokered. If no deal is reached after six months, tariffs of between 37.2% and 67.9% will be applied.

The early signs of an agreement being reached are not good, with China reportedly setting up its own investigation into subsidization of wine production in Europe. Meanwhile Yingli Solar, one of the country’s largest domestic PV manufacturers, said that it “regretted” the EC’s move, pointing out that it had come despite opposition from a majority of individual European states.

"Punitive tariffs – no matter at what level – will inevitably lead to higher prices for solar products causing at least the stagnation of the solar industry in Europe,” said CEO Liansheng Miao. “We therefore encourage the prompt resumption of talks between China and the European Commission.”

Pricing cartel?
The EC defended its decision by saying that it wanted to create a level playing field for Europe's renewable energy industry, which is seen as essential if the region is to meet its stiff renewable energy targets.

“Unfair trade in solar panels does not help the environment and is not compatible with a healthy global solar industry,” it said. “The Commission believes that a market that faces dumped imports will drive local producers out of business and discourages EU producers from developing cutting-edge technologies in the renewable energy sector.”

It appears that the EC is even countenancing the possibility of setting up a pricing cartel along the lines of that employed by the Organization of the Petroleum Exporting Countries (OPEC). It said:

“The Commission is open to discuss alternative forms of measures which would be equivalent to the 47% duty. Both World Trade Organization (WTO) and EU law offer this possibility in the form of a price undertaking – a commitment not to sell below an agreed price.”

The EU’s Trade Commissioner Karel De Gucht said Chinese companies that had co-operated with the EC will face lower tariffs, and that the Commission’s staggered response would allow markets to adapt smoothly – though the solar sector has throughout its short existence been subject to huge jolts created by changes in policy and subsidy levels.

He described the two-month window for discussions as a “one-time offer to the Chinese side, providing a very clear incentive to negotiate”.

“The ball is now in China’s court,” said De Gucht. “It is clear that if China does not provide a solution by August, then the higher tariffs will apply.”

Describing the action as an emergency measure needed to save a European business sector that has been hugely undercut by cheap imports over the past two years, leading to several high-profile bankruptcies, De Gucht added: “Our response is balanced, legal and justified within international trade rules and designed to prevent the situation turning fatal.”

“Not protectionism”
He also denied that the move amounted to protectionism, saying that it was instead designed to ensure that international trade rules also applied to Chinese companies.

“The simple question we have been asked to examine is whether Chinese companies are dumping solar panels which end up being sold at lower price than it costs to produce them in the first place,” he said. “The answer is simple: Yes – Chinese companies are dumping their underpriced solar panels on Europe. Our estimate of the fair sale price of a Chinese solar panel would actually be 88% higher than the current price for which they are sold on the European market.”

By flooding the market with cheap goods, Chinese firms have been able to capture 80% of EU market share, during a period of massive overcapacity throughout the industry. In its analysis, the EC estimated that Chinese firms alone were producing fully one-and-a-half times the global demand for solar panels. “They are simply producing too much,” De Gucht said.

And while those cheap and plentiful imports have helped to push the price of solar-generated electricity to levels that are now competitive with fossil fuels in some locations, the trade commissioner dismissed that as a “race to the bottom” in which everyone loses.

“Even those arguing that cheap solar panels are good for sustainable energy and the environment must realize that you need to keep the solar panel industry 'sustainable' in the first place if you are going to see any benefits over time,” de Gucht concluded.

“I would prefer a negotiated solution and quickly – there is no reason for this to last months if there is a sincere desire by our Chinese partners to seek a solution through 'price-undertakings.' But it is the role of Chinese exporters and the Chinese Chamber of Commerce to now step forward with a solution that removes the injury to the European solar panel industry.”