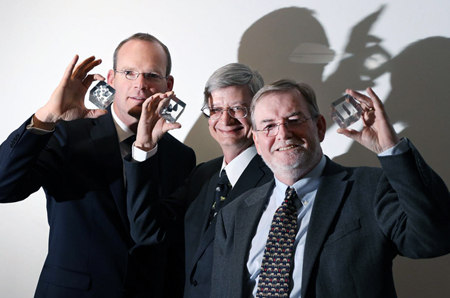 Intel has announced details of the second phase of its research investment at the Tyndall National Institute at University College Cork, Ireland.

The investment of $1.5m over the next three years secures the continued collaboration between Tyndall and the heart of Intel’s process technology research group in the US, following the reported success of the first phase of the program which ran from 2009-2012.

The agreement will again provide Intel with a commercial exploitation license to technology created through the collaboration with Tyndall. Intel and Tyndall have been working closely together for a number of years on a range of different technologies leading to the first phase of research investment by Intel in the Institute in 2009.

This latest funding agreement, which is the only one of its kind for Intel in Ireland, enables the continuing relationship directly between Tyndall and Intel’s internal research group in Portland, Oregon, USA. Dr. Mike Mayberry, Director of Components Research in Portland and, Corporate VP Technology & Manufacturing Group, Intel, joined Eamonn Sinnott, General Manager at Intel Ireland and VP Technology & Manufacturing Group, Intel, to make the funding announcement. Tyndall was represented by CEO Dr. Kieran Drain and members of his senior staff, and Minister Simon Coveney, was also in attendance at the event which was held today’s at Intel’s campus in Leixlip, near Dublin.

Speaking at the event and announcing the new funding agreement, Intel’s Mike Mayberry said “I am delighted to be here today to announce our next phase of funding at the Tyndall National Institute. This repeat Intel investment of $1.5m for a further three years is a testament to the success of the 2009-2012 program in which we enjoyed a highly collaborative engagement which produced some useful learnings in areas such as photonics, device modelling and new material development“.

Tyndall CEO, Dr. Kieran Drain added, “Renewing an engagement of this size is a clear indicator that we need to continue our strategy of delivering scientific excellence with a deep understanding of the issues involved in putting new materials and processes into practice in real devices.”

“This agreement with Intel, is a direct result of the investments over the past 10 years by Science Foundation Ireland (SFI), the Higher Education Authority (HEA) and the Industrial Development Authority (IDA), which has attracted leading scientists and built word-class research facilities in Ireland."

Minister Coveney, welcomed the second phase of the Intel-Tyndall advanced research agreement, saying it signaled an important collaboration between industry and higher education. “This is exactly the type of research partnership that we in Government are trying to foster illustrating how some of Ireland’s leading academics are working in collaboration with one of the world’s leading companies.

"The announcement today underpins Ireland’s reputation as having the high-quality research infrastructure and talent needed to develop cuttingedge technologies for globally competitive markets. Intel is a company that is designing how the world will work in the future and this continued investment in the Tyndall National Institute is a testament to the quality and calibre of the research work being carried out there.

Julie Dorel, Tyndall's Marketing Communications Manager, told optics.org, "This funding from Intel is a purely commercial arrangement between the company and Tyndall, separate from the Science Foundation Ireland funding announced at the end of February 2013, and from the Competitiveness and Innovation Framework Programme."

Under the new agreement, Tyndall and Intel Researchers will investigate next generation materials, devices and photonics technologies which will build on the work of the first phase of the partnership to enable key innovations for future electronic devices. Intel's Portland USA operation will be working with four Tyndall research groups: Photonics, Micro/Nanoelectronics, Theory modelling & Design, and Wafer Fabrication.