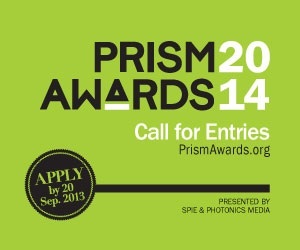 Entries have just opened for the 2014 Prism Awards, so if you’ve developed a photonic product that breaks with convention, has solved a long-standing problem or has improved life in general, now is your chance to gain deserved recognition by entering the competition.

Any photonic products sold, delivered, or launched between January 1, 2013 and February 6, 2014 are eligible for the "Oscars" of the photonics industry, which are organized by optics.org publisher SPIE in collaboration with Photonics Media.

Applications are being accepted through September 20, after which entrants will be shortlisted by a panel of judges. Winners will then be presented with their awards at a gala dinner taking place during the Photonics West 2014 conference and trade show in San Francisco next year.

Making your application is straightforward: simply visit the Prism Awards web site and fill in the online form. There are eleven different award categories, covering a broad spectrum of product types and application sectors, although the definition of some categories has been tweaked since last year. For 2014, they are:

All entries will be scrutinized by the multinational panel of judges, which will comprise senior scientists, engineers and entrepreneurs. The application fee for the competition is $250.

One of the 2013 winners announced in February, Visualant (recognized in the “green photonics” category for its LED-based system for identifying materials), has just attracted $5 million in venture funding.

The round, led by New York’s Special Situations Technology Fund, is set to help the Seattle-based firm scale production of its “F12 ChromaID development kits” and also build specialized ChromaID products for developers.

Visualant is also working on a portable, wireless version of the system to monitor and diagnose health problems, and recently entered the Qualcomm Tricorder XPRIZE competition to develop a rapid identification tool similar to the device used by Spock in Star Trek.

• Abstracts for technical presentations at Photonics West 2014 are due by July 22. Next year, the SPIE-organized event is set to feature no fewer than 4500 presentations.