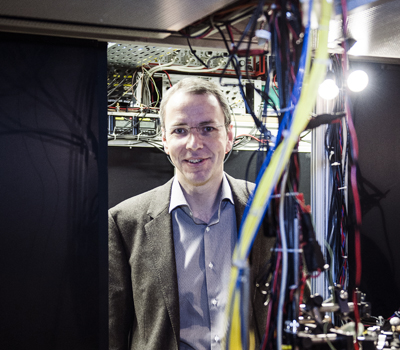 Prizewinner: German physicist Immanuel Bloch is to be honoured.

German physicist Immanuel Bloch is to be honoured for his groundbreaking work in the field of quantum simulation with ultracold atoms. In his experiments, Bloch creates microscopic “light crystals” from laser beams in whose optical lattices ultracold atoms are trapped. This quantum simulator serves as a model for the examination of fundamental quantum mechanics processes in materials such as metals.

The Koerber Prize 2013, endowed with 750,000 euros, has been awarded to Bloch for his work which has opened up a new area of research at the interface between quantum optics, quantum information processing and solid state physics. The Körber Prize honours scientists working on particularly innovative research projects.

Having studied physics in Bonn and conducted research at Stanford University, Immanuel Bloch obtained his PhD at the Ludwig Maximilian University of Munich (LMU) working under Theodor Hänsch, who went on to win the Nobel Prize in Physics. Since 2008, Bloch has been the Scientific Director of the Max Planck Institute of Quantum Optics and Professor of Quantum Optics at LMU since 2009.

The 40-year-old prize-winner concerns himself above all with the investigation of ultracold “quantum gases” in artificial crystals made of light. Such systems serve among other things as greatly magnified laboratory simulations of solids – the term used by physicists to describe solid materials such as metals or ceramics. Their hardness results from their crystalline lattice structure.

Physicists are interested in how well solids conduct electricity and heat and which processes are involved. When electricity flows through a solid, free electrons pass through the otherwise rigid crystalline structure. In metals, the electrons can move unhindered to a large extent. In non-conductive materials such as ceramics – so-called insulators – the electrons are trapped immovably in the crystalline lattice. 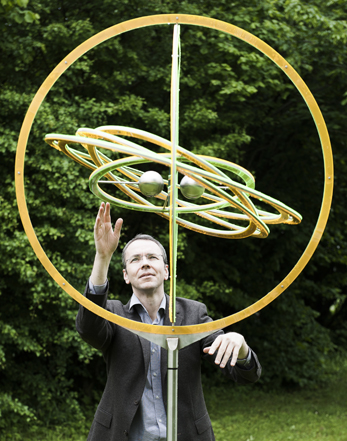 Bloch mimics these processes in technically complex experiments, the core of which is a small vacuum chamber. Inside the chamber, laser beams create an artificial crystal with a lattice consisting of light. The researchers trap ultracold atoms which imitate, for example, highly interactive electrons in these “light cages”. As the gaps between the atoms are 10,000 times larger in the light lattice than in real materials, microscopic physical processes can be observed in a unique way.

A further special feature is the fact that in the artificial crystal – unlike in nature – the parameters can be altered almost at random. For example, if the researchers reduce the intensity of the laser beams which are retaining the atoms in the optical cages, at some point the atoms will free themselves from their captivity. In this way, a simulated non-conductor becomes a conductor.

If the laser beams come from a different direction, new crystalline structures can be created. In addition, the interaction between the atoms can be tuned via an external magnetic field.

Unlike the world of traditional physics, quantum particles such as electrons are capable of assuming several states simultaneously. Making these states visible and characterising them precisely helps to better understand the fundamental structure of matter.

Using Bloch's quantum simulator, theoretical models of the structure of solids can be monitored accurately, among other things. Furthermore, the device facilitates experiments under extreme, previously unattainable conditions in the laboratory. The insights thus gained can help in the future to develop materials with tailored quantum properties – such as new superconductors which can conduct electricity without loss.

In the future, Bloch also hopes to be able to use his simulator as a quantum computer – against which even super-fast conventional computers would not stand a chance: “To calculate the interactions in a system comprising 300 quantum particles,” explains the prize-winner, “a conventional computer would require more memory cells than there are protons in the visible universe.”

Immanuel Bloch has already received numerous renowned science prizes. The Körber European Science Prize will be presented to him on September 6th in the Hamburg City Hall.