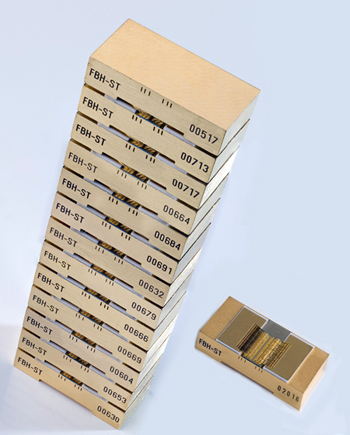 Diode stack with high-power diode lasers for the kilowatt range.

Diode lasers have been the key elements in high power laser systems for decades. Now, a new generation of ultra high power systems based on diode laser technology is under construction world-wide. These lasers are often targeting laser-induced fusion as a clean, safe, high-efficiency power source, as well as an instrument for basic research.

Although prototypes of smaller systems are possible based on today’s technology, a new kind of diode lasers with drastically increased power density, efficiency and reduced spectral width is required for full systems.

The Ferdinand-Braun-Institut, Leibniz-Institut für Höchstfrequenztechnik (FBH) presented the latest results from their project CryoLaser at CLEO 2013, the Conference on Lasers and Electro Optics, which concluded in San Jose, Calif. on June 14. CryoLaser was selected as a “hot topic” for CLEO 2013's central press event.

Ultra-high power laser systems require diode lasers that are not just extremely capable, but also manufacturable at low cost in high volume. FBH continues to work on the necessary design and technology, as a part of the CryoLaser Leibniz project.

FBH says that if the cost per photon is to be reduced, higher optical power density must be generated, reducing the amount of material required. Furthermore, the conversion efficiency and material quality also need to be improved.

CryoLaser uses a novel design concept, developing innovative structures that are optimized for operation at very low temperatures (typically below -73°C, 200K), when the performance of diode lasers is substantially improved.

FBH scientist Paul Crump present the group’s latest results in his invited talk on 12 June at CLEO. He focused on laser bars in the wavelength range 930 to 970nm. He commented, “Such diode lasers are the fundamental building blocks for pump sources for ytterbium-doped crystals in large laser facilities, where optical pulses are generated with peta-watt class peak energies and picosecond pulse widths.”

The individual laser bars in these pump sources emit 1.2ms-long optical pulses, previously with a typical output power between 300 and 500W. First tests of FBH bars at -50°C (223K) led to a world-wide best result of 1.7kW peak power per bar, that corresponds to a pulse energy of 2 J. 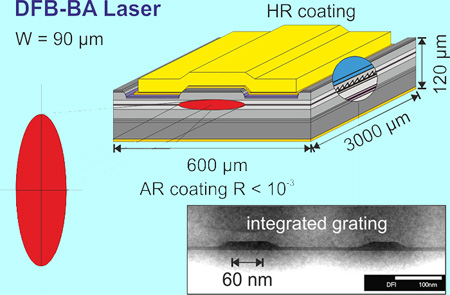 Crump added, “To date, such pump energies could only be achieved by combining the optical beams from at least five single bars. Currently, the FBH team is working to increase the electro-optical conversion efficiency of these bars from the current 50% to values of more than 80% at the targeted operational power of 1.6 kW per bar.”

The FBH is responsible for the full value chain within this development project, from design to construction of first prototypes, which will be delivered to project partners. As in previous technology developments, these pump sources will be evaluated together with the world-leading groups in their field. Here, these are LIFE in the USA, HiPER in Europe, both working on the use of ultra high power lasers for laser-initiated fusion.

Also, internal gratings must be introduced into the diode lasers, for reduced spectral width. These improvements are to be achieved by developing innovative new device designs for use at very low temperatures. This includes the development of new and improved simulation tools, fabrication and mounting of diode laser bars and stacks with innovative designs to the highest quality level as well as the installation of test facilities at 200K for verification of results.

The Cryolaser R&D project, which runs between January 2012 to December 2014, is funded by the Leibniz-Association; the funding was awarded based on the SAW competition. The project partners are the Lawrence Livermore National Laboratory and the UK's STFC Rutherford Appleton Laboratory, Central Laser Facility.