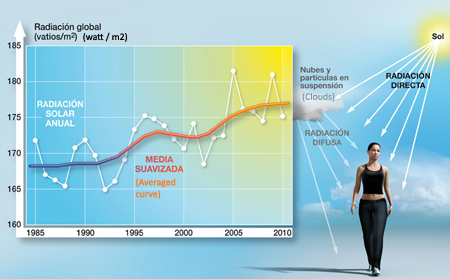 Solar radiation in Spain has increased by 2.3% every decade since the 1980s

Solar radiation in Spain has increased by 2.3% every decade since the 1980s, according to a study by researchers from the University of Girona and the Federal Institute of Technology (ETH) in Zurich. They say that this increase is linked to the decreased presence of clouds, which has increased the amount of direct radiation reaching us from the Sun.

"The mean annual G series over Spain shows a tendency to increase during the 1985-2010 period, with a significant linear trend of +3.9 W /m2 [2.3% more] per decade." This is the main conclusion of a study published in the journal Global and Planetary Change by the researchers.

Researcher Arturo Sánchez-Lorenzo, currently a postdoctoral researcher at the University of Girona, commented, "These data relate to global solar radiation, in other words the increase in direct radiation reaching us from the sun plus diffuse radiation which is scattered previously by clouds, atmospheric gases and aerosols."

What is intriguing is that the scientists found a decrease in the diffuse component, because of which direct radiation has increased to a proportionately higher degree. Only in 1991 and 1992 did diffuse radiation rise, and this was due to the ashes from Mount Pinatubo. Sánchez-Lorenzo added, "In general, however, we can observe a downward trend of - 2.1 W/m2 per decade between 1985 and 2010.

"The explanation lies in the fact that in Spain the amount of cloud has decreased markedly since the 1980s - as we have ascertained through other studies - and the tropospheric aerosol load may also have decreased. It seems to be very simple: fewer clouds result in higher solar radiation on the surface."

According to the scientists, this increase may also go hand in hand with more ultraviolet rays, an excess of which presents a health risk, potentially leading to skin cancer. The increase in global solar radiation is a phenomenon that has been observed in other parts of the world for almost 30 years, especially in developed countries, and it has been named "global brightening". The fall in the diffuse component has also been observed in Central European and Eastern countries.

The team behind the study has not yet analyzed the solar radiation data for 2011-2013 provided by the Spanish State Meteorological Agency, but the data from other European weather stations suggests that this brightening is still on the rise. "Studies such as these may be of interest to the solar energy industry, especially in countries like Spain, where not only do we already have a lot of direct solar radiation but now we are getting even more," affirms one of the other authors, Josep Calbó, who is a professor at the University of Girona, Spain.