Jana Huisman, an 18-year-old physics and mathematics undergraduate at the University of Bonn, was appointed Young Ambassador for Photonics Education by European Commissioner Neelie Kroes at the recent Photonics21 annual meeting.

Already in her third year at Bonn, Jana plans to visit three different research institutes this year in her role as ambassador – with the aim of stimulating interest in the study of photonics. But before that she experienced her first trade show: last month’s giant LASER: World of Photonics event. This is Jana’s blog report from Munich: 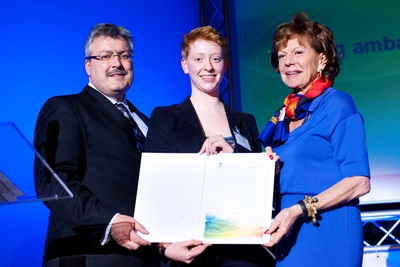 I was warned that a first trade fair can be overwhelming: the sudden exposure to the huge number of companies already working in this field; the abundance of names and of exhibits make the first steps into Laser World of Photonics feel like an initiation.

As we walk onto the fair, SPIE/OSA student chapter President Andrea’s[1] eyes begin to sparkle: “This,” she proclaims “is what I want to do. This is what I’m working towards. This is why I am studying optics.”

As an industrial fair, Laser World of Photonics is above all a celebration of what lasers can do. This year’s event marked the 40th anniversary of the fair in Munich. It has come a long way in that time: since its invention slightly more than 50 years ago the laser has become a key player in research and industry.

Some feel like a kid in a candy store when faced with such a plethora of innovations. Cesar[2], a masters student of Optics and Photonics, reflects: “I got involved [with photonics] because I wanted to apply physics in an area with as many applications as possible, in order to have more chances after my studies. At Laser World of Photonics, more than the research topics I enjoyed [seeing] the many companies in the field gathered to show what they do. This is normally not so easy to find published, or on the internet, in such an open way.”

Industry and research interplay
Although Laser World of Photonics has diversified a bit since its conception – there are lenses, coatings, and optical fibres in all shapes and sizes - it is still dominated by lasers. Whether big industrial lasers for cutting and welding, or laser scalpels: everything is featured at the fair.

And when faced with what can already be done, the possibilities for the future seem endless. The Fraunhofer IOF created a special stand to highlight the recent developments in additive laser printing. It is already being used to repair turbine blades and teeth alike, as well as fabricate small components for racing cars and airplanes.

Current research is targeted at accelerating the printing process and optimizing existing components with these technologies, but also the development of completely new structures that have never been fabricated before – this opens up a whole new world of design opportunities. 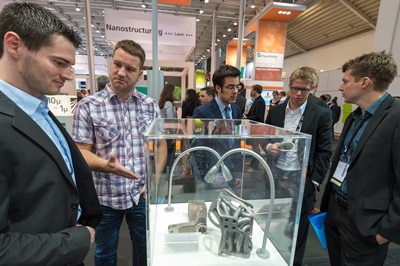 Fraunhofer: making it with lasers

The interplay between industry and research is very clear within photonics.

In an attempt to foster dialogue between the two, and bridge the gap between basic research and finished end product, several conferences (for example CLEO/Europe-IQEC, SPIE Optics+Metrology) were held contemporaneously and in the same complex as the laser fair.

The laser fair itself was a celebration of things that work. Although it was fascinating to see these innovations all together and in real life, many of the underlying technologies have already been around for some years. What was even more fascinating to me, therefore, was talking to all the young people – the innovators of the future.

Student events
More than anything, an event like Laser World of Photonics is used for networking.

When the fair closes for the general public, the individual stands organize parties for colleagues and clients - the exhibitors go on deep into the night. There were possibilities for students as well: SPIE organized a student chapter leadership meeting, as well as a Student-Fellow lunch.

And it pays off - as Andrea says: “What I liked best about the Laser fair was meeting people from other countries who are enjoying optics as I do, and having the opportunity to talk to scientists and engineers who are already working in industry and research. It motivates me to continue my studies and establish new professional and academic goals.”

Whether it is because the fair was in Munich, or because Germany has a traditionally strong laser industry, the fair seemed marked by big German companies. The congress participants however were extremely international. This was echoed at the SPIE student meeting: More than 30 students from at least 13 different countries participated. Although there was an exceptionally large delegation from the Karlsruhe School of Optics and Photonics, most of them came from abroad, and did their bachelors outside of Germany.

It is incredibly motivating to meet people from so many different cultures and backgrounds, and discuss one and the same topic with them. It is living proof of how far and wide photonics is being used. There is no faster way to get a feeling for what kind of photonics research is being done, and where, than to speak to other students and hear what they are working on.

Without photonics this global exchange of information would not be possible – it plays into the lithography of computer chips, the fabrication of planes and optical fibres. As the Internet and intercontinental travel have become a given – what are the givens of our future?

About the author
Jana Sanne Huisman is the Photonics21 Young Ambassador for Photonics Education and an Observer on the Board of Young Advisor to the Digital Agenda for Europe. She’s currently writing her bachelor thesis on state-dependent atom transport in polarization synthesized optical lattices. This blog post first appeared on the Photonics21 web site.

for reference
[1] Andrea Liliana Pacheco Tobo is the President of the SPIE/OSA Student Chapter in Bogotá, Colombia. She’s currently doing her master thesis in optical design, on corneal topography using a Hartmann test.

[2] Cesar Eduardo Garza Lozano, originally from Mexico, now studies at the Karlsruhe School of Optics and Photonics. During his bachelor thesis he built and characterized thin films to be used in solar cells.