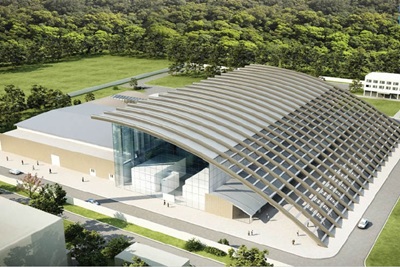 The research facility, in Magurele, is set to become home to the world’s most powerful laser when completed.

The light source for the Romanian facility is expected to comprise at least two “Apollon” type Ti: sapphire lasers, each capable of 10 PW power levels using the chirped-pulse amplification technique pioneered at the University of Rochester in the 1980s. It is expected that the laser will be able to fire 10 PW shots at a rate of at least one per minute.

Output intensities of up to 1024 W/cm2 will be used in combination with an electron beam to generate high-energy photons capable of interrogating atomic nuclei.

"ELI is hugely significant not just for Romania, but for all of Europe. It has the potential to attract researchers and students. This is about turning the brain-drain into brain circulation and attracting people down the path of a science career.”

Three-center research hub
ELI actually comprises a pan-European research facility with locations in the Czech Republic, Hungary and Romania. Total investment for the ELI-NP project is €356.2million, with 83% of the money coming from central European funds and the remainder from the host country directly.

Around €150 million of that total comes from Europe’s regional funding pot, with the aim of creating a research consortium bringing together 40 different partners from 13 European member states.

ELI-NP is located next to the Horia Hulubei National Institute of Physics and Nuclear Engineering to the south of Bucharest. According to the European Commission it should become operational in 2015, and is expected to employ more than 250 researchers and support staff by 2018.

•Later this month the Magurele site will host two technical workshops, one focused on gamma-ray experiments and a second on intense laser beams. For more information about the meetings, click here.

The laser workshop will aim to specify the main instrumentation that will be needed for experiments at the 2 x 10 PW laser system at ELI-NP from 2016 onwards.

Among the scheduled speakers are Gilles Cheriaux from LOA in France, Paul McKenna from the UK's SUPA organization, and Peter Thirolf from LMU in Germany.