Stock loses a quarter of its value as the company agrees to sell off assets ‘expeditiously’ under a new credit agreement. 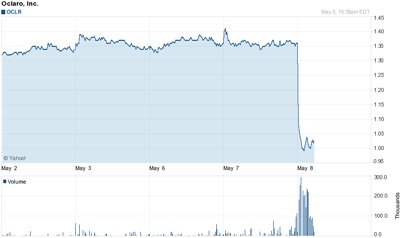 Oclaro, the photonic chip and component maker with key manufacturing operations in the UK, Switzerland and the US, is to sell off parts of its business in order to repay loans.

The California-headquartered company has just agreed a new $25 million one-year bridging loan with Providence Equity Capital Markets. In connection with that agreement, deals with existing lenders have been amended.

“Under the amended credit agreement we agreed to complete the sale of certain assets, product lines or operating segments of our business expeditiously, and we are actively engaged in a corresponding process,” said Oclaro in a statement coinciding with the firm’s latest quarterly financial results.

Asset sale
The revised credit agreement requires Oclaro to apply the proceeds of any such sales to repay the loans, with the company saying: "We believe that a successful completion of such disposition of assets, product lines or operating segments, is a necessary step to fund our continued operations and to complete our plans to restructure the company."

CEO Alain Couder, addressing an investor conference call to discuss the quarter, in which Oclaro posted a net loss of $41.6 million, said: “We are actively working product line divestiture opportunity and we are currently undergoing due diligence with several business.”

The new finance is part of a wider company effort to reach breakeven performance in Oclaro’s fiscal year 2014, which begins in July, and Couder says that simplifying the structure of the firm will make it “a lot easier to manage”.

While Oclaro is best-known for the components that it makes for applications in optical communications, it is also involved in a range of other photonics sectors, for example selling high-power diode laser modules for pumping fiber lasers, as well as visible-range emitters and VCSELs that are used in consumer electronics.

Couder said that continued soft demand in the telecommunications market had impacted Oclaro’s business in the latest quarter, where revenues of $141.6 million were down 11% sequentially and just within the lower end of earlier guidance.

But with the company making only a small gross margin on those sales, that translated to an operating loss of nearly $29 million – despite a $12 million insurance pay-out relating to the Thailand floods of late 2011 - and a net loss of $41.6 million as Oclaro was hit by unfavorable currency fluctuations.

Stock slumps to $1.00
Things are not expected to improve too much in the current quarter, with revenues likely to track slightly down and another hefty net loss looking inevitable. Describing the recent operational results as “not sustainable”, CFO Jerry Turin said he hoped that the sale of assets or product lines could act as a catalyst for returning the company onto a more even keel financially.

CEO Couder said that once those sell-offs had been completed, he was confident that Oclaro could become a profitable business with a bright future. “Even while we battle with short-term challenges, I’m very encouraged about the future of Oclaro,” he said.

The stock market, however, appeared to be rattled by the latest developments, with the price of Oclaro’s stock crashing by more than one quarter in early trading on May 8. At close to the Nasdaq’s cut-off point of $1.00 – a level not seen since the global financial crisis - that dragged the firm’s market capitalization below $100 million.

• Oclaro will be hoping for a more positive response when it releases new products at next week’s LASER World of Photonics trade show in Munich, Germany.

Among the new launches will be an 80 W fiber laser pump module that takes advantage of more efficient emitters and a 1060 nm distributed feedback (DFB) seed laser for ultrafast fiber and solid-state industrial sources. 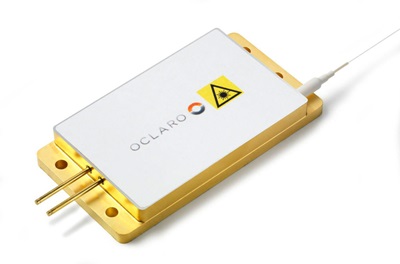 "The market for picosecond material processing is growing fast as these systems enable higher precision in micromachining by reducing the affected heat zone," said Gunnar Stolze, VP of Sales and Marketing for the Global Industrial and Consumer business at Oclaro.

The DFB seed exploits the ultra-high reliability requirements of telecom lasers, and is capable of delivering up to 800 mW with a 150 picosecond pulse width. In continuous-wave mode, it delivers 200 mW.